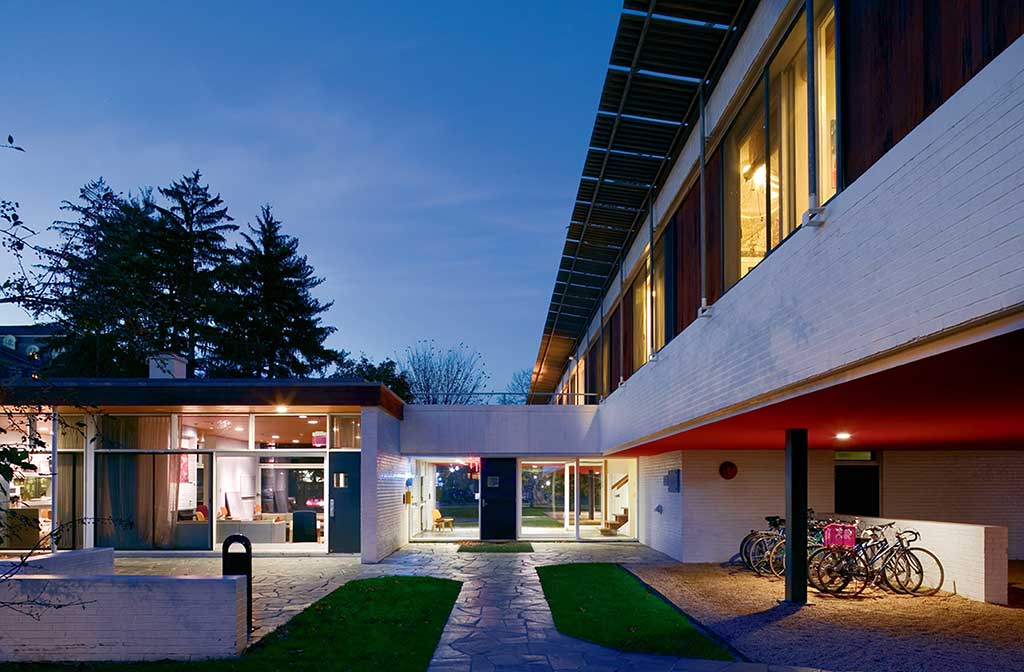 On October 5th, 1951, trustees, students, faculty and other members of the college community gathered for the presentation to the campus of a new building, one quite unlike anything they had seen before at Vassar: the Dexter M. Ferry Jr. Cooperative House. Donated by Dexter M. Ferry and designed by renowned architect Marcel Breuer, Ferry was the first building project supported by the college’s first female president, Sarah Gibson Blanding. Mr. Ferry attended the opening, formally presenting the house to Blanding and Mrs. Morris Hadley ’20, chair of the Board of Trustees.

The chair of the board of the Ferry-Morse Seed Company in Detroit and the son of its founder, Mr. Ferry explained that the house was a gift in appreciation of the close contact he had always had with Vassar. His two sisters, two daughters, daughter-in-law, and nieces were all alumnae of the college. Ferry had earlier commissioned Breuer to design a modern addition to his Georgian-style home in Baltimore, but it was his daughter Edith Ferry Hooper ’32 who suggested Breuer, who had completed the first of two modernist houses for her in Baltimore, as the architect of a communal residence at Vassar. The Ferry family had already been very generous donors to Vassar: Mr. Ferry’s sisters, Blanche Ferry Hooker ’99 and Queene Ferry Coonley ’96, sisters of Dexter, were the donors, in 1924, of Alumnae House.

Breuer’s architectural style was not new to the Ferry family, but Ferry House’s European International style was a shock to the gothic, traditional campus. Along with Eero Saarinen’s Emma Hartman Noyes House in 1958 and Paul Schweikher and Winston Elting’s Chicago Hall in 1959, this would be the first of three striking modernist buildings commissioned during Blanding’s administration at Vassar. Blanding’s efforts were in part influenced by Dexter Ferry’s niece, Blanchette Hooker Rockefeller ’31, who headed the Vassar trustee building committee and was a founder of the Museum of Modern Art, where, in 1949, Breuer’s House in the Museum Garden had accelerated his career.

Breuer’s designs for Ferry House were particularly innovative for the time. He studied at the Weimar Bauhaus and later became master of the woodworking shop under the direction of Martin Gropius. Moving to the United States after Hitler closed the Bauhaus, Breuer taught at Harvard’s Graduate School of Design where Gropius had become dean. The two also formed a private partnership until 1941 when Breuer established his own office and moved to New York City. After the Ferry House commission, Breuer began to design larger institutional buildings including such notables as the Whitney Museum in New York City, the UNESCO Headquarters in Paris, and the IBM Research Center in New York. Prior to these larger commissions, Breuer was dedicated to his small and modest projects—he worked intensely on Ferry House, designing much of the internal bedroom cabinetry himself and was involved in all of the detailing including the selection of furniture by Saarinen, Thonet and Eames and of interior fabrics from Knoll Associates.

Designed in the late 1940s and under construction by 1950, Ferry House was presented to its community by Breuer himself, who emphasized to those gathered at its dedication the “living quality of stone,” a rising element in modern architecture at the time. The house was built in a “binuclear” layout, executed by layering the ground and upstairs floors into a T-pattern so that sound from the downstairs common areas does not travel to the private living quarters upstairs. The ground floor consisted of a series of flexible spaces that could be rearranged by sliding doors and panels depending on their function. The kitchen at the front of the volume was separated behind a horizontal window that overlooked the multiple common rooms for dining, living, and study areas, which opened to covered outdoor areas for ping pong tables, games, bicycles and a patio where residents could dine outside in warmer months. The exterior walls of these ground-floor public spaces were made of floor-to-ceiling glass with sliding doors, which, when open, brought the landscape inside, thus expanding the modest dimensions of the house. The lower volume engaged the landscape through the use of a continuous series of low walls that merged the gardens with the building. Former Vassar President and architectural historian Frances Fergusson, observed that Breuer “modified the strict machinelike modernism of the 1930s into a very particular American mode that included modern stone materials and an interest in texture and linking the building to the landscape.” The upper level, “floating” among the treetops, housed private rooms that accommodated up to twenty-six students along with an additional common area, known as the “loft.” Constructed of steel resting on brick piers, this wing was oriented east-west so that both sides of the rooms received direct sunlight during the day.

The building was cited for “excellence in design” by the Museum of Modern Art, and it has secured its place in the history of American architecture. Ferry’s aesthetic simplicity and complex functionality confirms Breuer’s idea “that beauty serves a practical purpose and that practicality is beautiful.” Bauhaus education and philosophy emphasized “the social responsibility of art and design,” and Breuer foregrounded the values of communal living in his designs, reflected in the form and structure of the building. Ferry’s binuclear design was used to create a space “in which public and private activities are formally separated by volume and spatial composition. . . With transparency to the outside world, the slate floors convey a sense of visual and emotional unity between the indoors and the outdoors, and a sense of sunny airiness due to the large open glass windows, Ferry is quite conducive to a house that concerns itself with the living environment and nature.” With the multiple common areas, including a large kitchen for cooking meals for guests and residents, a large dining room, a downstairs lounge, an upstairs lounge, a roof deck, outdoor patios, and a television room, there are many opportunities for both privacy and interaction between residents, friends, and guests. The building successfully incorporates a domestic quality within the vocabulary of modern sensibility.

In the fall of 1951, twenty-seven Vassar students moved in for the first semester of Ferry’s lifetime, nervous to take part in a new experimental living environment but eager to fulfill their commitment to managing the house and perform the domestic duties associated with cooperative life. While the exterior of the house was something new to Vassar, the internal cooperative system that would develop inside was not. Cooperative living had been a part of Vassar’s history since the 1930s. In the wake of the Great Depression, the earliest coop, or “self-help house” was created in Raymond both to afford scholarship students the ability to make ends meet at Vassar and to try a new style of living, where tuition would decrease as students performed dining and cleaning services. The first full-fledged coop was located in Blodgett Hall, home of the department of euthenics at the time. Euthenics, a term coined by Ellen Swallow Richards 1870 from the Greek verb “euthenein,” meaning “to thrive or flourish,” taught what she called “the science of better living,” including environmentalism, the prevention and removal of disease, social interaction skills, nutrition, and home management. The partial coop system in Raymond proved more popular as it was not seen as an impediment to the academic or social life of students. In 1938, students moved from Blodgett into the newly remodeled Palmer House on the Vassar Wing Farm, some distance from campus. Despite its geographical isolation, the cooperative living style was proudly upheld by its residents before closing in 1947.

The second world war disrupted the cooperative tradition and left the college with shortages of both dorm space as well as domestic employees. Blanding was eager to reestablish the tradition, and moved quickly to bring the Ferry House project to realization. Blanding and the board of trustees faced strong opposition, however, regarding Ferry’s proposed location in the prominent plot next to Strong House. Instead, Ferry was relegated to “the backyard of Vassar,” near the laundry and power generator facilities behind Main Building. Ferry’s position near the heart of campus did, however, reflect the administration’s expectation that it would serve as a model for egalitarian values. Margaret Seligman Lewisohn, chair of the trustee committee on undergraduate life just before Ferry opened, stated, “I believe firmly that a cooperative house is a necessary addition to any American campus … It can be an important and living demonstration of democracy in action.” Its literal centrality and transparency led to the nickname “Ferry fishbowl” due to the ability of passersby to peer inside and catch a glimpse of communal life in action.

Another nickname for the house was “the college’s little experiment,” which proved apt as its experimental nature never quite faded—the house has remained in constant flux since it opened in 1951. Part of Ferry’s overarching narrative, however, has been one of gradual self- identification and independence. Early on in its history, Ferry was conceived more as a sister dormitory of Main Building, resulting in yet another nickname, “David and Goliath.” It was originally controlled more directly by the administration—Blanding chaired a committee of administrators, faculty, and students to determine Ferry’s procedures, regulations, and initial house members. Applicants were required by the committee to provide a financial statement and a letter of recommendation from a faculty member in order to apply. In addition, what are now two separate student bedrooms on the ground floor used to be a faculty apartment, which housed a residential advisor for the cooperative. Over the years, autonomy over Ferry’s internal system has gradually transferred to student hands, and in 2002 the house was finally granted representation by the Vassar Students Association and is now independent from the other dormitories.

Ferry’s autonomy has not consistently guaranteed its success as a functioning communal residence—with every cycle of new students, the internal system and community values are subject to change, which can destabilize the sense of continuity and pose challenges to cooperative management. In 1994, citing unhealthy living conditions and a general lack of respect for the house, administrators shut down Ferry for the fall semester. Ferry reopened the following semester, but this time with a new constitution that clearly defined the expectations of its residents. The constitution declared that “the efficiency of running a cooperative house is dependent on the full and active participation of its residents,” and expressed a renewed commitment to the ”wellness concept.” The constitution also decreased the number of residents in order to ease management of the house. The application process, now fully student-run, was altered to further screen applicants, asking them to state their definition of cooperative living and what contributions they would be able to make to the group. A procedure was also established for “imposing sanctions” on those who do not comply with the house rules. Aside from a semester in 2002 when Ferry served as a dormitory to accommodate students displaced from Jewett House due to renovations, it has since remained open to students as a cooperative housing option.

Currently the house adheres to a consensus-based style of decision-making and has become associated with certain ideals of environmental sustainability and mindfulness. Ferry does not simply provide an inexpensive housing option, but an alternative lifestyle to that experienced in the dormitories. Ferry does, however, “stand alone” from much of the campus philosophically as well as architecturally, and has come under criticism for its perceived exclusivity and aloofness from the rest of campus. As Ferry House has become increasingly student-driven over the years, its intentions have generally moved from Blanding’s expectation of increasing self-help opportunities toward an initiative to challenge a mainstream lifestyle of individualism, finding, according to Alessandra Seiter ’17, “potential solutions to the problem of the loss or decline of community experienced by a capitalist modern society.” With its ever changing mission and values, Ferry will continue to evolve as new students continue to inhabit this unique space as they see fit, with or without knowledge of its cooperative history.