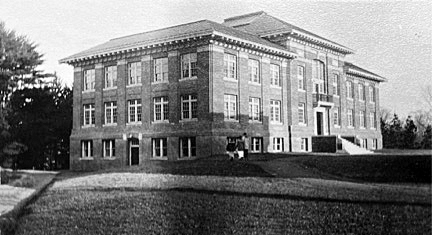 Scientific experiment was itself a key component of the “great experiment” that was Vassar College, as President Emeritus James Monroe Taylor observed in 1915 at a celebration of the college’s 50th year and of his 28 years in its service. The college opened in 1865, he said, with “a broad course of study, a faculty which contained several men well known in their work and one distinguished woman, and laboratories for the sciences that few colleges could then boast.”

From its outset, Vassar embraced the sciences as an integral part in the curriculum. Among its nine original professors, four were science specialists, in line with Matthew Vassar’s goal of a women’s college curriculum equal to that of the most eminent male universities. Chemistry, biology, and physics were “among the most popular courses in the curriculum,” as Frances Cohen ‘95 and Elizabeth Boyd ’95 recalled in their souvenir volume. Conforming to the tradition of such institutions, the Vassar science curriculum stressed experimentation in the physical sciences, but early facilities were far from ideal. Assisted by two “teachers,” Emma Sayles and Barbara Grant, the first chemistry professor, Charles Farrar, got along with a laboratory on Main Building’s first floor, designated by its architect, James Renwick, Jr., as the “Basement.” Farrar’s successor in 1874, LeRoy Cooley, was quick to see that his laboratory lacked sufficient ventilation and that it, therefore, posed a perpetual risk. His continual demand for safer facilities was first answered in 1880 with the construction of the Vassar Brothers Laboratory, the gift of Matthew Vassar’s nephews, and the first separate building for laboratory use at a women’s college.

Eighteen years later in 1909, Sanders Hall of Chemistry further enabled Vassar’s scientific instruction. A few years before the building was erected, the Chemistry Department had reported, “Although our advanced classes are small they nearly fill the laboratory space… We need a new laboratory.” Following President Samuel L. Caldwell’s rather uneventful seven-year tenure—one marked by financial insecurity, Caldwell’s entrenched religiosity, his enlargement of the Preparatory School and his lack of collaboration with comparable institutions—Taylor hoped to revitalize the college’s out-of-date facilities alongside its academics. Recognizing the inadequacy of Vassar’s science spaces, among others, Taylor embarked on a rigorous building program.

Sanders Chemistry was donated by trustee Rev. Henry M. Sanders—a Baptist clergyman prominent in New York City as pastor of the Madison Avenue Baptist Church—in memory of his wife, Eleanor Butler Sanders, a progressive woman active in New York public life who had died in 1905. A trustee from 1895 until his death in 1921, Dr. Sanders spent a considerable part of his fortune donating to academic and religious institutions. Although he originally suggested his building house the music department, his wife being a devoted musician, he willingly embraced the calls for updated science facilities.

New York City architects Ewing and Chappelle designed the new laboratory building in a neoclassical style with pilasters and a string course on its central facade. The roof of the central portion, which extends into wings, is raised by a half story topped with skylights to illuminate the upper story. The core of the interior is a spacious lecture hall, but the entire interior was designed by Professor Moulton, who rejoiced in his annual report: “I could not have had a freer hand if I had been spending my own money.”

Learning from the issues posed by the large size of Main, yet still guided by the foresight that the department was certainly growing, the building’s architects were deliberate with its 24,000 square foot size: “In planning an effort was made to produce a building not too large to be economically and effectively administered with our present classes and yet which would accommodate without crowding a number nearly twice as large as the present enrollment of the department.”

The Miscellany News lauded its design:

“Its equipment, including electrical apparatus for screening the sky-light for stereopticon work, is ideal.” Furthermore, the building included special ventilating flues in its laboratories, recitation rooms, a library, museum, and smaller rooms in the basement. Like New England Building (1901), Sanders was built with gas and electric capability, allowing for the addition of electricity in 1911 to illuminate students’ laboratory work past sundown. Sanders had “the most advanced design of any chemistry building in the country,” according to chemistry professor Curt Beck in 1977. It was the first to have a central exhaust system and central steam lines.

While it proved sufficient for some time, the building inevitably became run-down over the decades. In 1977, students and members of the chemistry department urged the administration to investigate Sanders, which they saw as being so antique as to present “fires and explosions” as “potential dangers.” Department staff believed that the wood of the floors and stairways had soaked up chemicals and would leave a fire likely to “rip through the place.” The Miscellany News reported that chemistry Professor Edward Linner had taken home a plank of wood from Sanders following its minor 1950s renovations and that when this wood was thrown into his fireplace, its chemical-saturated condition sparked flames that shot out of his chimney. Furthermore, faculty complained that Sanders suffered severe overcrowding due to the growing department.

An independent architect was brought in to study its hazards, and a $100,000 renovation program was completed in September of the next year. Although renovations supplied new firewalls and exits, new safety showers, an updated ventilation system, heating ducts, and storage for flammable chemicals, the chemistry department still expressed concern over the flammability of the interior. Its renovations even became the object of satire in the April Fools Miscellany News the next year, which jokingly reported that Sanders was condemned by the Occupational Safety and Health Administration (OSHA) for its “flagrant neglect” and “horrendous safety violations” that could cause the building to “blow up at any minute.”

Calls for replacement were finally answered in 1984 when the chemistry department was moved to the Seeley G. Mudd Chemistry Building, a new facility built on the previous site of the Vassar Brothers Laboratory and completing the “science quad.” Renamed Sanders Classrooms, the use of the original chemistry building after the construction of the new Mudd facility was in question for some time, with the chemistry department vying for it to be repurposed as a computer science center. However, the administration chose instead in 1986 to move the English department, over three to five years, into the space. The use of space was particularly important as the drama department was “space-oriented” and needed more room than was had in Avery. The proposed plan in 1986 to repurpose the building was to first renovate Sanders and then have the English, Classics, and Drama departments move into it. Then Avery, 120 years old in 1986, would also be renovated and the film and drama departments would move back.

In April of 1990, a renovated Sanders was accordingly rededicated to the English department. The building is thus now home to English, Greek and Roman Studies, Chinese, Japanese, and Asian studies. Its large theater also provides a recreational space for its frequent comedy and acapella shows, among others.