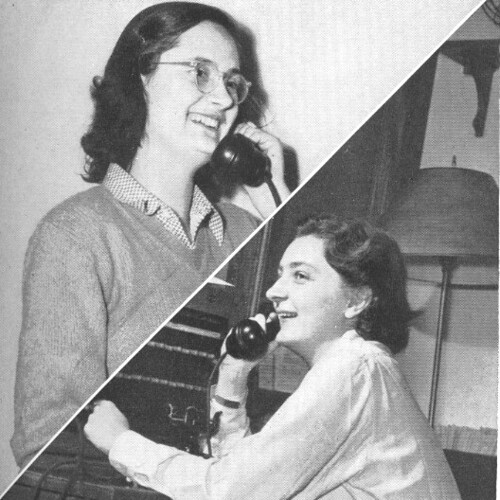 A few years before it became a campus reality, the telephone apparently seized the imagination of Vassar students, who wove the new medium into several articles in The Vassar Miscellany. Among the “fantastic shapes” among the “vapors I have created” at night in the laboratory used by Mary W. Clarke ’78 to prophesy her classmates’ futures in September 1877—the year after the patenting of the telephone and 50 years before the first transatlantic phone call—was that of Jane E. “Jenny” Davis:

“She has devoted herself entirely to cultivating her voice. To this end she attended a School of Oratory, and practiced in private as an auctioneer. After some years of close application, Jennie was engaged by the government to operate the American end of the Atlantic telephone, connecting New York and Liverpool.”

C. Lena Bostwick ’83 made a similar use of the device in casting, in the fall of her sophomore year, her classmates’ fates ten years into the future. “Her method was original,” noted The Miscellany, “she did not fall into the usual nightmare, and dream dreams, and see sights till you lost your place, but talked to her distant classmates through a telephone in 1890.”

Earlier that year, however, in February 1880, The Miscellany announced the amazing instrument had come to the campus, effacing the familiar telegraph as Vassar’s favored method of communicating to at least a select sampling of the world outside its gates.

“‘This is a progressive age!’ We no longer telegraph, we telephone. The presiding genius of the little table sacred to ‘The Western Union Telegraph Co.’ has gone to another and fairer clime than the College office. Dust gathers on the brass keys, while [college treasurer and registrar Willard L. Dean] Mr. Deane [sic] talks confidentially to the responsive orifice beside the desk. He has sole charge of this new connection with the outer world, and is ready to send messages with all possible secrecy and dispatch. The telephone connects with houses of Messrs. Vassar [John Guy and Matthew, Jr.], [General Superintendent Benson] Van Vliet and Deane, and with the general telephone office, which is in turn connected with about eighty telephones in the city.”

On December 12, 1894, the trustees’ executive committee proposed installing a campus telephone system for the first time: “it was resolved that the superintendent be directed to connect the college [Main Building], and the Engine and Boiler House with Mr. Law’s apartments in the Gate House, by telephone.” By 1902,Vassar had significantly expanded its campus telephone system, installing additional telephones for student use and a line connecting the new Swift Infirmary to the Physician’s quarters in the southeast corner of Main Building. However, general outside communication wasn’t possible until 1916, when a service line connected Vassar to the New York Telephone Company. Soon there were requests from faculty members and administrators to have telephones installed in offices and houses around campus. After 1916 the campus messenger system was adapted to bring messages between rooms with and without telephones.

The telephone system stayed about the same until 1926 when a more “modern and comprehensive” telephone service was installed providing all academic and business offices, dormitories, and faculty housing on campus with telephone lines. All calls made to the college and from within the college were routed by operators through the Vassar College Switchboard.

The next change to the telephone service came thirty years later, in 1956, when Vassar updated its system to a dial service. Telephone users no longer had to tell their desired extension to an operator; they could dial it themselves for a direct connection. However, all incoming and outgoing calls to and from campus still had to pass through the switchboard operators.

In 1973, the campus updated again, creating some direct outside lines to try and relieve pressure on what Vice President for Admiinistration Jame Ritterskamp called “a very antiquated system” that routed all calls through the manual switchboard. The switchboard was replaced in early 1982 by a completely computerized system. Operators remained in the Message Center in Main Building, mainly to route calls from off campus and to assist with on-campus emergencies. In 2005, a complely automated voice-recognition system called Parlance was installed to direct off campus calls and provide telephone information. Campus operators remain available weekdays during business hours, and emergency calls at other times are routed through the Security Department.