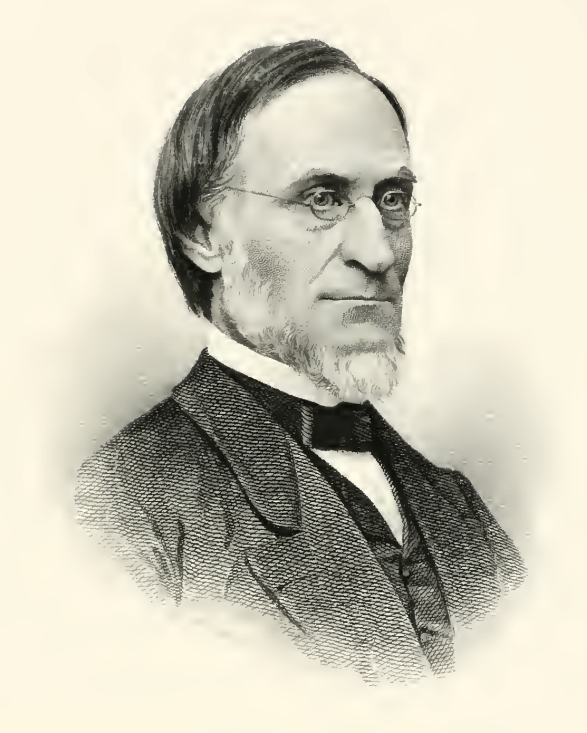 “Where is the Yale, or Harvard, or Princeton for the education of females?” demanded Gorham Dummer Abbott, a clergyman, author, and the three-time founder of short-lived women’s colleges. He apparently spent his final years advising someone who also wished to take up the mission: Matthew Vassar. 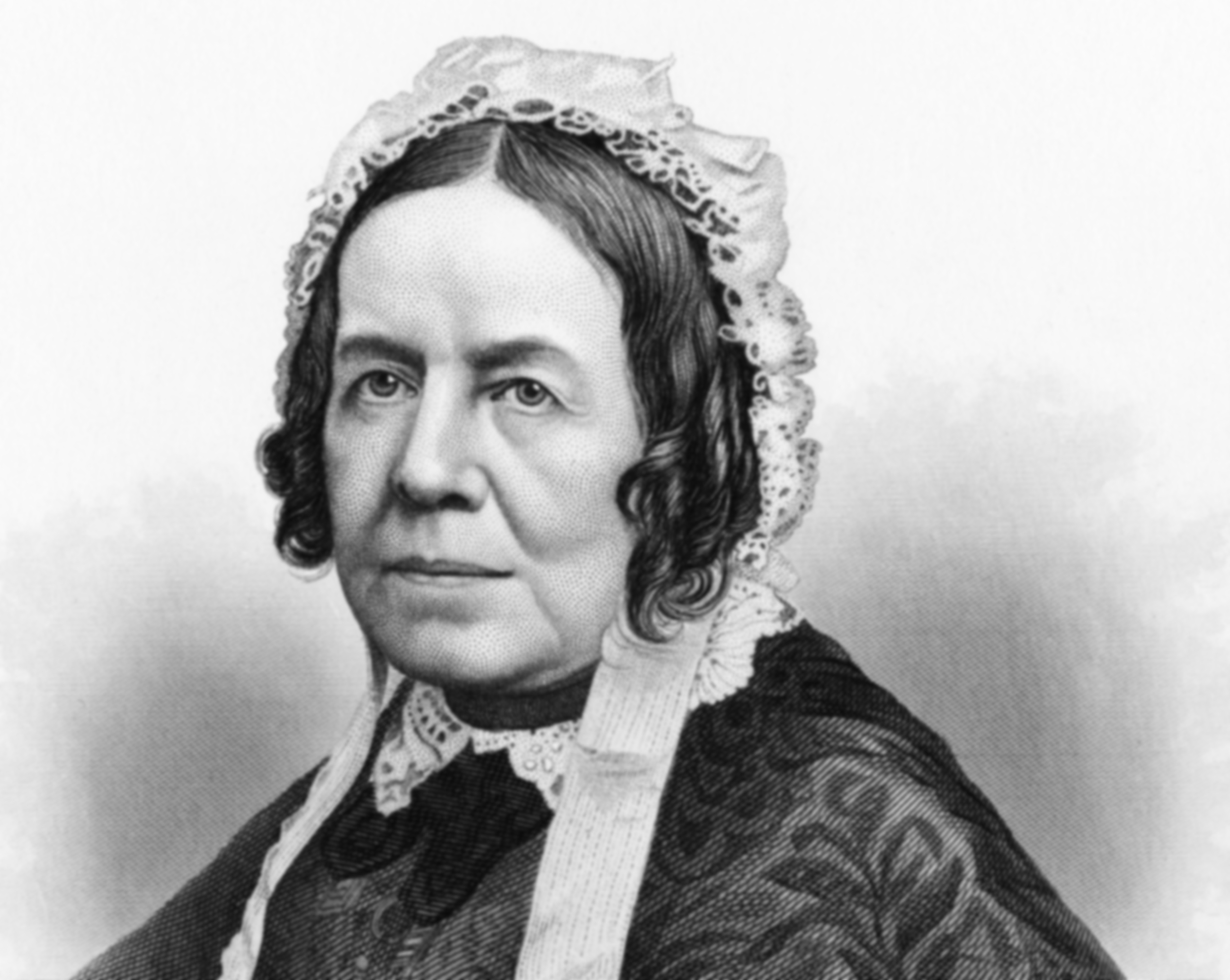 “Matthew Vassar was not a scholar or statesman, or of ‘learned profession,’ but around his grave the mourners were a band of eminent men in the best ranks of American life. He died childless; but hundreds of the fair daughters of our land wept his death as for a beloved father; and his memory will […]

While Milo P. Jewett has received most of the credit for inspiring Matthew Vassar to establish a women’s college, it was Lydia Booth, Vassar’s niece, who originally suggested the idea. Born in Poughkeepsie on March 17, 1803, Booth was the daughter of George Booth, a wool manufacturer, and step-daughter to Maria Vassar, Matthew Vassar’s sister. […]

The case of Emma Church is a curious glimpse into the early history of Art at Vassar College. Not much is known about this mid-nineteenth century American artist. Before 1862 she emigrated to Rome, where she studied painting and earned a living by copying the works of the Old Masters which could be seen in […] 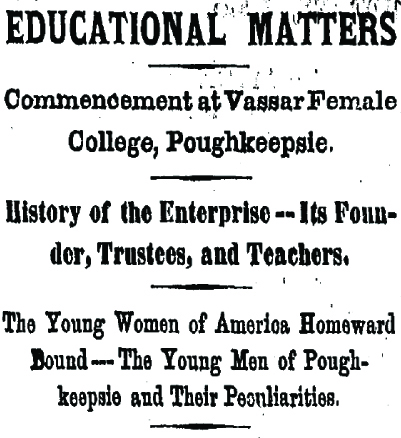 The closing ceremonies events in 1866 were reported in The New York Times on June 28, 1866. The paper’s “Special Correspondent” for the event was the pseudonymous “Diabolus,” who gives a peculiarly effective picture of the energy, hope, and potential in the new college. Article reprint included.

Introduction Preparing in 1873 an account of its brief history, John Howard Raymond, the president of Vassar Female College and the professor of moral philosophy when it opened in September 1865, recalled the well over 1,000 first applicants for admission. “A large number, between the ages of fifteen and twenty-four,” he wrote, “from all parts […]

Mary Augusta Jordan (1855–1942) graduated from Vassar in 1876, the first of three Jordan sisters to attend the college. She received her Master’s degree in English from Vassar in 1878 and served as a “critic” in the Vassar English department from 1880 to 1884, when she accepted an appointment as an assistant professor in rhetoric […] 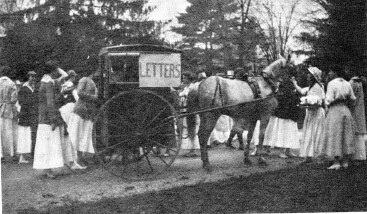 Throughout the opening years of Vassar College, a number of students wrote letters to their parents, siblings, friends, and even future husbands. Before the advent of telephones or email, the weekly letter home was the primary way students kept in touch with their families. This tradition continued for some time: the last letter home in […]

Hannah Lyman, Vassar’s first Lady Principal, was born January 29, 1816 in Northampton, Massachusetts. After completing her education in Northampton and Ipswich, she taught at Gorham Academy in Maine and Mrs. Gray’s Seminary and served as principal of another girls’ school in Montreal. In June 1865 the Board of Trustees unanimously elected Miss Lyman as […]

According to President Raymond’s eldest daughter, “there was no office, perhaps, to which [the president] attached more importance than that of the Lady Principal, on account of the intimate relation she must hold to the students, and her influence in the shaping of character.” Such high expectations presented a massive undertaking for Hannah Lyman, the […]

On May 30, 1926, a few days before Commencement and before the meeting at which Vassar’s board of trustees would provisionally agree to abolish compulsory daily Chapel attendance—a reform long-sought by students—President MacCracken published his reflections on the “student movement.” He examined the place of students in the historical development of American education, the growth […]

Speaking in Cleveland to the Associate Alumnae of Vassar College at their annual luncheon on February 8, 1913, Maria Dickinson McGraw ’67, one of the first four students to graduate from the college offered “A Glimpse Backwards.” In June, 1862, my High School seatmate, Hattie Warner, and I signed an agreement that in the event […] 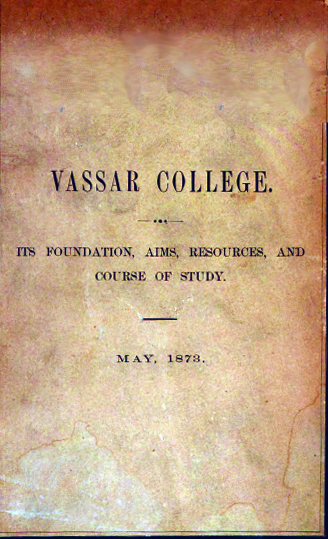 In May of 1873 at the request of the United States Commissioner of Education, Vassar’s president, John Howard Raymond, submitted a report on the college’s first seven years. Commissioner Eaton wanted to present this early account of Vassar’s experiment in women’s education to the World Exposition in Vienna, to be held later that year. Raymond published his report as “A College for Women, in Poughkeepsie, N. Y.” Reprint included.

“With true college zeal we had decided that we must have ‘colors,’ and finally fixed upon ‘Rose and Silver-gray’ for no reason except as a pretty combination.” Writing as “S. M. G” in Vassar Miscellany in 1873, Sarah Mariva Glazier ‘68 recalled the early students’ choice of colors for their college. Her article, “In Memoriam,” […]

Unable in June 1933 to attend the Vassar reunions, Anna Baker Brooks, a member in 1868 of the college’s second graduating class, wrote from her home in California about a sad incident. Her letter, under the title “From the Sixty-Fifth Reunion Class, a Letter,” appeared in Vassar Quarterly. 2218 Fourth AvenueSacramento, California. To the Associate […]

The Great Experiment: a familiar epithet for Matthew Vassar’s ever-growing enterprise. Less familiar to most are the hardships and difficulties borne by a select few at the founding of the college. While the trials of presidents, trustees, and faculty have all been well documented, several others have been seemingly lost in the shuffle. Enter William […] 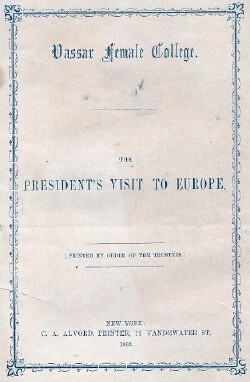 “[MILO P. JEWETT] described to Mr. Vassar again and again, how Mr. V would drive up the broad avenue in his barouche and be met with crowds of beautiful young ladies who would cover him with roses and lavish thanks on him as their wonderful benefactor.” (Excerpt from a letter from Nathan E. Wood to […]

From its earliest days, Vassar drew critical comment and frequent visitors, whether invited or not. Some arrived to deliver speeches or gather information for magazine articles, while others came out of sheer curiosity. Some would become lifelong affiliates of the fledgling institution, while others would never be heard of again. The following entries chronicle prominent […]