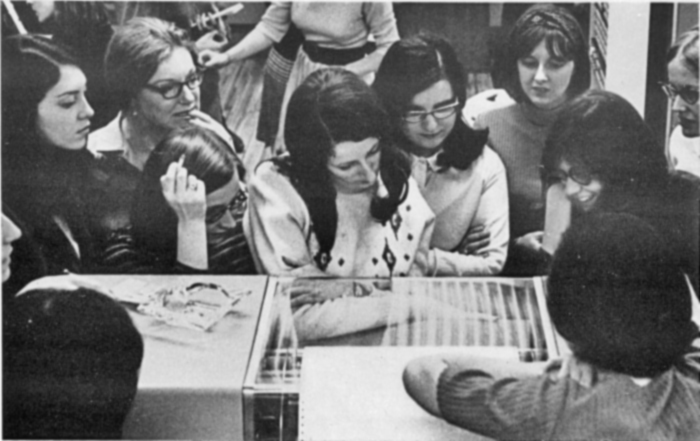 On January 11th, 1967, Vassar’s first computer, an IBM Systems/360 Model 30 E, was delivered, to be installed in the new Computer Center in the Old Laundry Building.  With this acquisition, Vassar put itself ahead in higher education’s quickening technology race.  While several universities in the United States housed computers, Vassar was the first women’s college and the second liberal arts college to have its own computer on campus. Computing technology was advancing and spreading at a very fast rate, but in 1967 only about 20,000 IBM 360s—arguably the most advanced commercially available computer—were in operation.  Vassar was also an anomaly in the level of access to computers it gave to undergraduate students—more so, perhaps, because it was a women’s college. The person credited with bringing the IBM 360 to Vassar is Professor of Mathematics Winifred “Tim” Asprey.  A native of Iowa and a third-generation Vassar alumna—her grandmother was in the Class of 1882 and her mother in 1905—she graduated from Vassar in 1938. Completing her PhD in mathematics at the University of Iowa in 1945, she returned to Vassar as an assistant professor in the mathematics department.

Tim Asprey’s interest in computers was spurred by the work of her mentor, favorite professor during her student days and friend, Grace Murray Hopper ‘28.  Like Asprey, Hopper had returned to Vassar, in 1931, after graduate study to teach in the mathematics department.  Taking a leave of absence from the college in 1943, Hopper joined the United States Navy Reserve and, maintaining her Navy status, she eventually became a senior mathematician at the Remington Rand Corporation. A leader in the emerging field of computer science, she is best remembered for her work in developing the COBOL programming language.  She also worked on Rand’s UNIVAC “thinking machine” and during that time invited Asprey to see the innovative device.  The chair of the mathematics department at this point, Asprey soon developed a life-long enthusiasm for and fascination with computers. Determined to learn more about these machines, she came to know a number of scientists and engineers at IBM’s laboratory and manufacturing facilities in Poughkeepsie.

These relationships eventually led to her taking a year off from teaching to spend the 1957-58 school year studying at IBM’s research laboratory.  Her enthusiasm for computers in general and her interest in IBM’s developing program forged an important bond between the company and the college.  Returning to her teaching, Asprey offered an advanced level mathematics course on digital computing with the somewhat daunting prerequisite or corequisite of calculus but access donated by IBM for students in the course to use the model 7040 at its Education Building.

Bringing a computer onto campus in 1967 was the next step in the efforts Asprey had engaged in on behalf of Vassar and its students. While the installation of the 360 was probably the inevitable culmination of this relationship, years before it had even been thought of advanced mathematics students at Vassar, were visiting IBM and using its machines.  And in 1966, Vassar’s grant application to the National Science Foundation for its computer center was—along with two others from Brown University, for biology, and UCLA, for chemistry—awarded the maximum allowable grant, $50,000. On September 29, 1967, after several months of installation in the new computer center, President Alan Simpson, as he put it, “baptized” Vassar’s IBM Systems/360 Model 30 E computer in a ceremony in Taylor Hall.  Dr. Herman Goldstine, a pioneer in the development of digital computing and the founding director of IBM’s Watson Research Center, attended the event, where Tim Asprey introduced the keynote speaker, her mentor and friend Commander Grace Murray Hopper, who spoke on “Computers and Your Future.”

“Mrs. Hopper,” Susan Frelich ’70 wrote in the Miscellany News, “reminded her listeners that although computers are undoubtedly here to stay, if they become frightened of the power of the machine, they could ‘always pull the plug’…. At this point in its history the computer is a tool for all disciplines, but, as Mrs. Hopper warned the audience, ‘Don’t forget it is second to the library.’”

Not everyone at Vassar was as eager as Ms. Asprey to associate with IBM and their computers.  On September 21, 1966, following the announcement of the purchase of the computer, the Miscellany News reported “cries from humanities students who felt their departments would suffer.”  In 1969, Ted Lieverman ’71 wrote an op-ed piece decrying “IBM intrusion onto campus”, referring to the college as the “Vassar Institute of Technology” and calling for rejection of talk of a potential graduate school in technology and for an end to ongoing consultations with IBM staff.  These sentiments had been parodied earlier in the 1964 April Fool’s edition of the Misc.  In “Vassar Protests the IBM Way” a fictional protest was described in which 900 Vassar students—”escorted by a vanguard of 50 bicycles decorated in pink and grey crepe paper”—marched on IBM headquarters, carrying signs bearing slogans such as “A world free from automation is a world full of love” and “Down with seven-digit telephone dials”…. Melanie Oldlife ’65, organizer of the march, stated, ‘The aim of this protest is to stop the insidious corruption of Vassar by IBM computers and to insure that we will not all be reduced to digits…’” The mock-protest “quickly ended,” according to the Misc., when a group of IBM representatives offered the protestors lemonade and cookies and invited them to a dance that evening at the IBM Country Club. But the actual reception of computing on campus was not at all so simply accomplished.

Unease about computers and criticism of IBM sharpened and grew more militant as organized movements against the Vietnam War took hold on college campuses throughout the country. On April 9, 1972, 60 Vassar students went to IBM’s headquarters with the intention of drawing attention to the use of IBM machines in the war and to the defense contracts filled by the company.  Fourteen students were arrested as they started setting up on IBM property for the planned week-long protest.  One of those arrested, Steve Peters ‘74, explained the group’s intentions to “confront IBM and the Poughkeepsie community with their complicity in the Indo-China War” in the Miscellany News.  Protests like these continued during the ensuing years, first against IBM’s role in the Vietnam War, then against its engagement with the apartheid government of South Africa.

Whatever Winifred Asprey’s opinion about these more overtly political protests of the seventies and eighties, she clearly understood the sentiment on campus that led to such resistance, and she acted to address it.  At convocation in May of 1966, in preparation for the arrival of the 360, she gave a talk called ‘Computers—Plus or Minus?” in which she advocated for acceptance of computers and their ability to “free man from mental drudgery.”  The speech was particularly geared towards students of the humanities, who she believed would need more convincing than those interested in the natural or social sciences.  Pointing out that computers had already proven themselves useful in certain areas of the humanities, she cited a computer program that helped determine the authorship of a piece of writing based on the distribution and frequency of certain words.

Asprey delivered this talk again during freshman orientation the following semester, and then expanded on many of the same points in a piece for the April 1967 edition of the Vassar Alumnae Magazine,  “Vassar’s Newest Jewel: the 360.”  She cited the mixed reactions on campus to the appearance of the computer, noting that for the “head-shaking group…the word computer connoted automation with subsequent loss of individualization. They were concerned, and rightly so, with the impact of the computer on the character of the College.”  After a lucid and detailed description of digital computing,  she urged the head-shakers to consider the advantages that computing could provide to academic fields across the board.

This was the essential pattern of what Asprey did during the period surrounding the 360’s installation.  In the fall semester of 1966, she offered short “computer appreciation” seminars for faculty and administrators which involved guest speakers and trips to IBM.  Following the arrival of the 360, she encouraged her students to create similar seminars for other students and arranged for non-credit courses on FORTRAN programming to be offered.  In these efforts, she was helped greatly by the relationships she had created at IBM; Vassar was granted permission to replicate large parts of IBM manuals to aid students interested in programming.

Asprey’s efforts paid off.  Following her article in the April edition of the Quarterly, numerous testimonies from faculty and students about the usefulness of the 360 and the kinds of projects they had already used it for began to appear.  Faculty from the physics, music, psychology and chemistry departments all weighed in on the value of computers to their respective fields and on the broader impact computing was likely to have at the college.  A number of students also wrote short pieces detailing the kinds of work they had done with the 360 in the three months since its installation, which ranged from game theory to linear algebra and quantum chemistry.

Anne Lounsbury ’67, a mathematics major and one of the students who became involved with the 360 during its first semester, founded and served as president of a Vassar chapter of the Association for Computing Machinery, the first at a women’s college. She worked as an intern for the Computer Center, helping to teach sections of an extracurricular “Introduction to the Computer” course for interested students with little or no knowledge of mathematics or computer programming.  As to the new 360, she wrote, “Certainly the presence of the computer has greatly affected students at Vassar.  Hopefully, in a few more years most of the undergraduates will have had some contact with it and the Vassar student chapter of the ACM will become a flourishing one.”

While many of the first to use the 360 were math majors or students in the “hard sciences” like physics and chemistry, some from majors less commonly linked to computer science also found uses for the new machine.  Edwina Marie Ames ’67, a psychology major, wrote:

“The Vassar computer will be useful to me in two ways.  First, I will be able to gain enough experience in computer techniques so that this step will be minimal or unnecessary in graduate school.  Second, I hope to write the programs for basic statistical models which I will be using next year and thereafter.  Hopefully, computer models of mental illnesses can be set up against which various biochemical and therapeutic techniques can be tested in order to predict experimental results.”

“Although it is too early,” Winifred Asprey wrote in April 1967, “to assess the impact that the 360 will have on the Vassar campus, widespread curiousity already exists.” She went on to describe the computer-appreciation courses being offered to “non-scientific faculty and administration members (shades of Art 105 and Music 140).” The disciplines “represented arts, classics, English, foreign languages, history, library, music, philosophy,” she reported. It would be 15 years before the college adopted an “authorized” microcomputer—the ill-fated DEC Rainbow—and several mainframe computers have followed the IBM System 360. It may still be too early to know where what that machine started will lead. What’s certain is that it and its spirited advocate initiated an essential new element in the life of the college, one that has touched the lives and curiosities of us all.