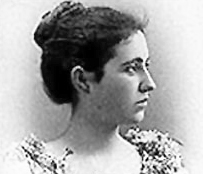 Adella Prentiss Hughes enjoyed telling how her maternal grandparents met. Her grandfather, Benjamin Rouse, lived in Boston. Paying a visit to his grandmother one evening, he was about to enter her house when he was struck by a woman’s voice coming from inside. Entering the house, he met the owner of the voice, a young woman from New York City, Rebecca Cromwell. Enchanted, Benjamin kept his distance for a year and a half until, feeling it was time for him to marry and unable to imagine himself with anyone else, he began to write to her. In July 1821, Miss Cromwell visited Boston again, and a month later the two were married. They moved to Cleveland, Ohio, where they lived for the rest of their lives, emerging, as historian Michael McTighe notes, as “pillars of antebellum Cleveland benevolence” active at several levels of public life. Hughes adored her grandparents and felt she had inherited much from them, specifically their shared passion for music and their sense of civic duty.

A moral reformer, founder of several philanthropies, first president of Cleveland’s New England Society and an avid singer, Benjamin often sang in the choir of the first Baptist Church in Cleveland, while Rebecca had a passion for public service, founding an orphanage in New York City and serving with what would become the American Red Cross during the Civil War. Music and public service became the lens through which Hughes focused her life. Nothing was more important to her than her work; she never had children and her one marriage dissolved after twenty years. Music and its promotion were her first loves in life, and chief among her many achievements was becoming the first woman in the United States, and possibly the world, to establish and manage a symphony orchestra.

Born on November 29, 1869, Adella Prentiss attended Cleveland’s first public school, Rockwell Grammar School, and then Miss Fisher’s School for Girls before entering Vassar, as a preparatory student at age 16. A diligent student, she was also known to President James Monroe Taylor as a member of a group of pranksters he referred to as “The Rioters.” Despite their irreverent sense of fun they were all hard workers and stayed in his good graces throughout their time at the college.

Prentiss dived into the world of music as soon as she arrived at Vassar. She was president of the Class of 1890 glee club in her freshman year and was responsible for organizing a number of tours for the group during her four years at college. It wasn’t until her senior year, however, that she truly began, as she termed it, her “life-long occupation of trying to stimulate the American musician.”

Insufficiently occupied by both the glee club and the college choir, she founded a banjo club and took it upon herself to organize a concert for the combined banjo and glee clubs on March 1, 1890.

The concert featured pieces honoring Vassar College, commissioned from her friends at school and from a male acquaintance at Yale. The concert was so memorable that thirty years later when she brought the Cleveland Orchestra to perform at Vassar, the glee club serenaded her with the songs she had been responsible for, now college favorites.

Music was not Prentiss’s only passion at Vassar. “The professor who had the greatest influence on me,” she wrote in her autobiography, “was Lucy M. Salmon,” because of Salmon’s “modern approach to history.” Prentiss excelled in Professor Salmon’s classes, and they formed a close friendship.

Upon her graduation in 1890, her mother took Adella on an extended musical tour of Europe. Professor Salmon urged her to pursue a PhD in history while she was there, but she deferred to her mother and used the sojourn to continue her education in music. They spent few first weeks in Paris, followed by a stay in Geneva where they attended the great Concours Musicale, a musical competition held every ten years that attracted the best orchestras and choirs in Europe. From there they travelled down the Rhine to Berlin, where they stayed for six months. In The Cleveland Orchestra Story: “Second to None,” Donald Rosenberg quotes Prentiss’s recollection of watching, from behind the percussion section, Hans von Bulöw’s direction of the Berlin Philharmonic: “The noise was overwhelming, but I learned that night what the conductor of a symphony orchestra has the power to do with his players. I became fairly hypnotized in following the music through my eyes, in watching the conductor, thereby almost losing consciousness of the sound.”

Adella Prentiss grew enormously as a musician during this visit, studying and playing with Europeans and Americans and attending dozens of concerts, many of which left a life-long impression on her. She also made connections that would become important later in life. The Cleveland Orchestra played a number of works by Howard Brockman, a composer she met abroad, and Sol Marcosson, a violinist Prentiss met in Berlin, became the first concertmaster of the Cleveland Orchestra.

Prentiss returned to Cleveland in 1891 and began her professional career in music, initially as an accompanist and a pianist in chamber music ensembles. She was a charter member, in 1894, of the Fortnightly Music Club, founded by a group of wealthy Cleveland women to promote orchestral music. A turning point in her life came in March 1898, when she organized a performance of a new song sequence by the English composer, Liza Lehmann, entitled “In a Persian Garden.”

Prentiss arranged for the hall, assembled the four singers and was their accompanist. The concert was a great success, and her friends encouraged her to organize more like it. Looking back, she recalled her surprise: “I had not been aware of the fact that the management of a concert was anything to be labeled or taken into consideration, for it had been handled in a way that was natural to me.”

The acclaimed program toured twice, with the assistance of Cleveland entrepreneur John D. Rockefeller, whose daughter Bessie had been a friend of Prentiss when they were students at Vassar. In October 1898, “through the kindness of Mr. Rockefeller,” noted The Vassar Miscellany, Prentiss and her company presented “In a Persian Garden” at Vassar.

Adella Prentiss began inviting individual musicians and groups to perform at Gray’s Armory and the Masonic Hall in Cleveland, and in 1900, when the Fortnightly club sponsored the second biennial festival of the National Federation of Music Clubs, Prentiss, asked to arrange the orchestra, passed over the nascent Cleveland Symphony Orchestra and hired instead the Pittsburgh Symphony Orchestra, under the direction of composer and conductor Victor Herbert.

Prentiss was tireless, and she also had the right connections. Thanks to her efforts, Richard Strauss, Ignace Jan Paderewski, Madame Ernestine Schumann-Heinck, Nellie Melba, Gustav Mahler, the Diaghilev Ballets Russes and the Boston Grand Opera performed in Cleveland. But visiting artists apparently didn’t satisfy her. Despite the series of performances she was able to organize and despite the fate of earlier attempts, she still felt that Cleveland deserved a permanent symphony orchestra.

In the late 1880s Prentiss had appeared as a pianist with the Philharmonic Orchestra, put together in Cleveland by local musicians, which had struggled, failed, reorganized in 1894 and perished in 1899. A successor ensemble, the Cleveland Symphony Orchestra, conducted by a local musician, Johann Beck, appeared in January 1900 and, largely through mismanagement, foundered in the spring of 1901. Its successor, the Cleveland Grand Orchestra, sponsored largely by a Cleveland tailor and music lover, praised and aided by a very successful young impresario—known after her marriage in 1904 to vocal instructor Felix Hughes, as Adella Prentiss Hughes—and directed by the conductors of two former ensembles, appeared in 1905.

The new ensemble struggled along—after 1910 as the Cleveland Symphony Orchestra—eventually garnering some funding from the city government. It’s quality, however, was never beyond the “pop” range, and the orchestra was continually—albeit unintentionally—out-classed by the presentations brought in by Adella herself. The Cleveland Symphony Orchestra ceased operation in the spring of 1915.

“By 1915, “ Donald Rosenberg observes, “Hughes had been a survivor of Cleveland’s symphony wars for almost two decades. The indomitable woman who so zealously spread appreciation for great music—in an environment dominated by high-powered men—was about to lead the city to a cultural milestone.” Hughes’s vision began to take shape in 1918 when a local pastor, Father John Powers of St. Ann’s Parish, wanted to give a vocal concert and approached her for help. Father Powers had initially gone to Archie Bell, a music critic for the Cleveland News. Given Hughes’s growing reputation, Bell recommended that Father Powers enlist her help. Hughes recruited Nikolai Sokoloff to conduct the orchestra for the concert and with his assistance assembled a very respectable ensemble of 54 musicians. At the concert on December 11, 1918, in Gray’s Armory, Father Powers sang a number of pieces. Sokoloff’s conducting was widely praised and the concert was a success. The seeds of the Cleveland Orchestra had been planted.

Secure within its new parent organization and equipped with steady funding—following a brief interruption due to an influenza epidemic—the orchestra could perform regularly. With Sokoloff as its conductor, its ranks grew steadily. Within ten years 90 musicians were giving regular concerts in venues throughout Cleveland.

With an orchestra of such size and quality, talk of a permanent home for it was inevitable. For most of the 1920s, the orchestra performed in the Masonic Auditorium on East 36th street and Euclid Avenue. John L. Severance, heir to the fortune his father had amassed as treasurer of Standard Oil and himself a successful entrepreneur, was the president of the Musical Arts Association from 1921 to 1936. In 1928, he and his wife made a million dollar pledge toward the construction of a hall for the Cleveland Orchestra. When his wife, Elisabeth Severance, died shortly after his announcement, Severance directed more of his personal wealth into the project in her memory. By the time the Severance Hall was complete, he had contributed almost half of the 7 million dollars raised for the building’s construction and maintenance. Hughes raised the remaining 4 million dollars largely on her own.

Designed by the Cleveland firm, Walker and Weeks, and built in a combination of Art-Deco, Egyptian Revival, Classicist and Modernist styles, the concert hall opened on February 5, 1931, with a gala concert. The evening’s program included Brahms’s 1st Symphony, Bach’s Passacaglia, and Charles Martin Loeffler’s “Evocation.” The evening was one of the crowning achievements of Hughes’s life, and Severance Hall remains one of the most admired concert halls in the United States.

Two years after the grand opening of Severance Hall, Hughes retired from leadership of the Cleveland Orchestra. She continued to work as a volunteer vice president and secretary for the Musical Arts Association until 1945, when she ceased working due to poor health and a desire to write her memoirs. During these twelve years she worked on extending the reach of the Cleveland Orchestra, such as by arranging concerts for children in the local school districts. Her goal was to instill an appreciation of classical music in Cleveland’s youngest citizens, an appreciation that would ideally ensure the continued existence of the orchestra. Thousands of children attended these concerts, which numbered 12 per year by the orchestra’s eighth season.

Hughes died on August 23, 1950, after more than forty years as an energetic and effective promoter of music in Cleveland and beyond it. Along with those of Boston, Chicago, New York and Philadelphia, the Cleveland Orchestra remains one of the “big five” American orchestras and still plays in Severance Hall, which has seen a number of sweeping renovations since its construction. An impressively motivated person, placing her work before everything else in her life, Adella Prentiss Hughes found the highest satisfaction in “the enjoyment of beautiful things I have been able to bring.”

Rosenberg, Donald, The Cleveland Orchestra Story: “Second to None,” Gray and Company, Cleveland, 2000.