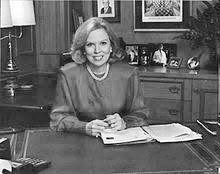 In 1985, Dr. Bernadine Healy ’65 told a Vassar audience: “Live in the present. . . .be committed and intense about what you’re doing today. . . . I’d like to quote an anonymous Spanish poet: ‘Traveler, there is no path. The path is made by walking.’” Dr. Healy dedicated her life to two things: cardiology and women’s rights. Throughout her career in a male-dominated profession, Healy combined her two passions into a single drive to address, as she put it, the “differences between men and women…in the health-care environment, and in the research environment.” Although she was not always recognized for her passion, Healy indefatigably fought for the greater good.

Bernadine Patricia Healy was born, the second of four daughters, on August 4, 1944, to Michael and Violet McGrath Healy who operated a small perfume factory in Long Island City, Queens. Bernadine grew up with unassuming means, living above her parents’ basement factory and wearing only homemade clothes. As second-generation Irish American immigrants, Healy’s parents had dropped out of school to help provide for their families.

Nevertheless, both stressed education and demanded the best for their daughter. Healy followed her parents’ prescribed path and “lived,” she recalled “in my books.” At the age of twelve, Healy, formerly set on becoming a nun, decided that medicine would be her path. To accommodate this decision, she and her parents defied the Catholic Church and enrolled Healy in the prestigious Hunter College High School where she graduated first in her class in 1962. Bernadine continued her education with a full scholarship at Vassar College, following the advice of her high school counselor who thought that the “protected environment” would minimalize her social awkwardness.

Although made with little recognition of Healy’s internal determination, the counselor’s suggestion paid off, and Vassar, she recalled, “allowed me to continue as a nerd without knowing otherwise” and “find my own path.” Healy majored in chemistry, but she also embraced the college’s liberal arts diversity, sampling courses ranging from East-Indian religion to constitutional law. She later credited her liberal arts education with structuring “my thinking about life.” Outside of the classroom, Healy served as a waitress for Junior Prom and secretary treasurer of Davison House.

Healy’s professional career began in earnest at the National Heart, Lung, and Blood Institute at the National Institutes of Health where she worked from 1974 until 1976. From there, she moved to Johns Hopkins Hospital where she worked as director of the cardiac care unit until 1984. She also served on the Johns Hopkins University faculty and became a full professor in 1982. While at Johns Hopkins, Healy fought for feminist ideals when she “took to task” an exclusively male club that made her the target of “a sexist and pornographic skit.” Her actions of self-defense did not ingratiate her to the “old-boys club” that permeated the institution. Healy said on the matter, “I was one of the leaders of that institution, but after that episode I would go in a room and there were different vibrations. It did not make me popular.” This moment was typical of Bernadine Healy’s constant struggle to assert herself as both a woman and a respected leader within a male-dominated environment.

Bernadine’s career went into high gear in the mid-1980s. Healy made her first jump into politics in 1984 when she was appointed by President Ronald Reagan to the post of Deputy Director of the White House Office of Science and Policy. She held this post until 1985 when she became chair of the Research Institute at the Cleveland Clinic Foundation. At this new position, she led the research programs of nine different departments while simultaneously practicing as a cardiologist. The job also allowed her to work with her new husband Dr. Floyd Loop, a prominent cardiac surgeon in his own right.

In the 1990s Healy took on some of the biggest challenges of her life. In 1991, President George H.W. Bush appointed her Director of the National Institutes of Health, the first woman ever to hold the position. Notorious for struggling with issues of sex and race in hiring and promoting practices, the agency had been without a director for two years. The NIH might have seen Healy’s hiring as a step in the right direction, but Healy knew the NIH’s reputation. As she said upon her appointment, “Things are so bad, some have said, they couldn’t even get a man to be NIH director.” This type of biting joke struck at the reality of Healy’s situation in which she was always battling uphill to gain the respect she deserved.

In her tenure as director, Healy led a number of initiatives. She championed, she said, an “award program to keep talented scientists working within the grant system during funding lapses, oversaw the development of a major intramural genetics laboratory and an Institute for Nursing Research, and launched the $625 million Women’s Health Initiative (a long-term health study involving 150,000 women).” She naturally used her position to directly champion women’s issues, most prominently mandating that the NIH only fund clinical trials that used both men and women when the ailment in question was relevant to both sexes. Although her initiatives of equality were not, as the New York Times later noted, “broadly supported…had Dr. Healy not championed research on women’s health, how much longer would healthy women have been encouraged to take hormone drugs?”

Bernadine Healy’s successful work at the NIH came to an end with a change in the White House in 1993, but Healy stayed in politics with a 1994 run for Senate in Ohio. It was also in this year that she returned to her alma mater as Vassar’s commencement speaker. In her address, Healy insisted that Vassar students follow their own path, take care of their health, and heed Edna St. Vincent Millay’s creed to have “light” in their lives. Although her Senate run ended in a loss in the primary, Healy stayed in Ohio and served as Dean at Ohio State University from 1995 to 1999. This responsibility also allowed her to teach and work at the American Heart Association where she served as president in 1998-99. In this capacity, she again followed her two passions and, as her NIH biographer said, “initiated pioneering research into women’s heart disease and demonstrated that medical progress depends on the public and medical community’s perception that there is a problem to be solved. ”

Even a diagnosis, in 1998, of brain cancer could not slow down this dynamic woman. While she dealt with both personal and professional frustrations throughout the decade, her difficult path led her to a position in which she was able to directly push for change on the issues that mattered to her the most.

The turn of the century saw another potent shift in Bernadine Healy’s career, as in 1999 she became the first physician to lead the Red Cross. Unfortunately, her short tenure was marred by scandals that arose from the same tensions that had plagued her throughout her career. As the New York Times reported, “she struggled to coordinate [the Red Cross’s] complex, often contradictory missions of humanitarian disaster relief and the businesslike maintenance of blood supplies.” The decisive and curt manner that worked well in the emergency room rubbed people the wrong way at this new position. Five months after she took charge, the Food and Drug Administration found violations at the headquarter level in how the Red Cross handled its blood supply. In addition, in the aftermath of the terrorist attacks on September 11, 2001, the Red Cross came under fire for the way in which it distributed the $1 billion raised for assistance. New York Attorney General Eliot Spitzer attacked Healy for “sequester[ing] [donated money] into long-term plan” rather than immediate relief. Bernadine Healy ardently defended her decision, arguing that it was acceptable under the organization’s bylaws. Nevertheless, this scandal led to the end of her tenure.

Ejection from the leadership of the Red Cross did not put the end to the controversy involving Healy. Most esteemed doctors had decried the anti-vaccination movement, Healy was one of the few prominent doctors to break with this position. She unremittingly asserted her opinion that there was not enough research to definitively dismiss the potential risks of vaccinations, and in doing so, gave legitimacy to the movement. She said on the matter, “I think public health officials have been too quick to dismiss the [vaccine-autism] hypothesis as ‘irrational,’ without sufficient studies of causation… without studying the population that got sick…I have not seen major studies that focus on 300 kids who got autistic symptoms within a period of a few weeks of the vaccines.” For this resolve, Healy received the Age of Autism Person of the Year Award in 2008 for, as her commendation said, “yanked the vaccine-autism debate back into mainstream medicine where it has always belonged.”

While her opinions were not always popular, and her methods not always appreciated, Healy stuck to her convictions. Throughout her life she was a doer, always fighting for her beliefs whatever other people thought. “Professionally,” she said for a NIH biography project, “I am proud that I never compromised my core beliefs, never wobbled on what I believed to be the right path, and had the strength to endure both.” The obstinacy reflected in such declarations led her to numerous successes, but also to failures. Healy was not a perfect person but nonetheless stood for a greater good that rested at the base of everything she tried to accomplish. After a 13-year fight, Dr. Bernadine Healy succumbed to brain cancer on August 6, 2011, at her home in Gates Mill Ohio, at the age of 67. She was survived by her husband and two daughters.

In an appreciation of Dr. Healy at the time of her death, a colleague and one of her successors as director of the NIH, Dr. Francis S. Collins, recalled her friend’s comment about pioneering women in medicine: “All of us, I believe, in our hearts are humanitarian. And how wonderful to be in a career that in almost any dimension of it—whether you’re the doctor at the bedside, or the scientist in the laboratory, or the public health doc tracking down the latest epidemic—that you are doing something that is pure in its fundamental purpose, which is helping another human being.”