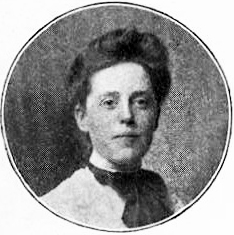 Clara Mildred Thompson was born in Atlanta, Georgia on November 27, 1881 to Robert Galbraith Thompson, an Irish-born hotel owner, and Alice Wood Thompson. Initially preferring to be called “Mildred,” she added the initial “C.” when she discovered there was another child named “Mildred Thompson” in her neighborhood. After attending Atlanta public schools, among them Girls’ High School, she enrolled at Vassar in 1899, “because,” she recalled, “most of my friends were going.” Thompson was also influenced by the Vassar women she met: “I chose Vassar originally because of the group of women who were in the Vassar Club. They struck me as the type of women I would like to become. One, Mrs. Harold Way, who was active in the fight against child labor, particularly influenced me. She even taught me German privately so I could meet the entrance requirements.”

C. Mildred described herself at Vassar as “a green little girl who didn’t expect much attention, and didn’t get it in her freshman year.” In her sophomore year, she was secretary of Philaletheis and first substitute for the basketball team, and in her junior year, C. Mildred Thompson and two other Vassar debaters– Elizabeth Forrest Johnson ’02 and Celia Arnold Spicer ’03—defeated Wellesley in the first intercollegiate debate competition between women’s colleges.

Thompson argued the negative on the question: “Resolved, that the United States should subsidize a merchant marine.” The outcome was a proud one for Vassar; a bonfire was held in front of Taylor Hall, and the three debaters were carried on the crowd’s shoulders from Main Gate to Lathrop House and then, a manuscript letter recalled, “dragged around campus in a 3 wheeled parcel cart of the janitors with 65 feet of rope.”

After graduating from Vassar in 1903 with Phi Beta Kappa honors, Thompson taught English and History at the Wilford School in Baltimore, Maryland from 1903 until 1906. She then entered Columbia University, studying under the eminent scholar of Reconstruction, Professor William Archibald Dunning. One of “Dunning Men,” a group of Southern graduate students studying reconstruction, Thompson was the only female contributor to Studies in Southern History and Politics Inscribed to William Archibald Dunning . . . by His Former Pupils the Authors (1914) and the only woman to publish one of the Dunning School of Reconstruction historiography’s seven southern state studies. Her Reconstruction in Georgia: Economic, Social, Political: 1865-1872 (1915) was considered one of the series’ best. Thompson received her Master’s degree from Columbia in 1907 and her Ph.D. in 1915. During the final year of her Master’s degree, Thompson taught algebra and geometry at Brooklyn Heights Seminary.

Thompson returned to Vassar in 1908 as a substitute teacher for Professor of History Eloise Ellery ‘97, on leave for the 1908-1909 academic year. C. Mildred came to Vassar on a regular appointment as an instructor in 1910; she became assistant professor in 1915 and associate professor in 1917.

In December 1916, Thompson was appointed secretary of the new Committee on Admission, created as part of President Henry Noble MacCracken’s initiative to admit students who qualified on academic merit, but may not have been registered at birth at the college. (Vassar completed the transition from the registration system to the merit system in 1928.) In June 1923, C. Mildred Thompson became the second ever dean of Vassar College, replacing Ella McCaleb ’78. She was also elevated to the rank of full professor. Throughout her academic life at Vassar, Thompson published articles and conference papers extensively.

One of her prime concerns as dean was students’ mental health. Vassar’s first consultant psychiatrist operated through the dean’s office under her auspices, one of the first such appointments in higher education in America. Thompson also championed a liberal scholarship policy and designed and implemented the brief, experimental three-year A.B. degree plan, created as a war measure and adopted in February 1943. In 1932, Thompson was the first occupant of the Dean’s House, designed by architect Ruth Adams ’04, and in 1940 one of the seven new 75th anniversary scholarships was named for C. Mildred Thompson, in recognition of her service to the college.

Outside the college, Thompson was devoted to many political causes. Actively supporting a woman’s right to vote, she marched in 1911 with Lucy Maynard Salmon in the 2nd suffrage parade in New York City. Her most extensive civic involvement was in Democratic politics during the Roosevelt administration. A close friend of Eleanor Roosevelt, Thompson was chairman of the woman’s division of the Democratic National Committee and head of an educator’s committee during Roosevelt’s re-election bid in 1936. She actively campaigned for Roosevelt in 1936 and again in 1940 and 1944. A few days before the 1944 election, Thompson joined a group of 37 prominent women, including Barnard Dean Virginia Gildersleeve and Sarah Lawrence’s president Constance Warren ’04, in calling upon American women to support his re-election. Thompson did not, however, always agree with the policies of the Roosevelt administration. In June 1938, she organized a petition from 75 Vassar faculty members, asking President Roosevelt to lift the munitions embargo on Spain. Thompson was also frequent participant during the 1940son the popular radio program Information, Please!, and she hosted a weekly program on New York’s WJZ called Listen, the Women.

Thompson gained an increasingly prominent role in international and domestic affairs in the post-war era. On April 6, 1944, the State Department appointed her as one of six U.S. representatives to the Conference of Allied Ministers of Education in London (CAME). Serving alongside United States Commissioner of Education John W. Studebaker and Representative J. William Fulbright of Arkansas, she was the only female American delegate at the conference, which discussed educational reconstruction and a worldwide school plan. CAME gave rise to another meeting in London in 1945, which Thompson also attended, in which delegates from 37 countries came together to found the United Nations Educational, Scientific and Cultural Organization (UNESCO). Thompson was also a member of the steering committee to plan the October 1946 international assembly of women delegates from United Nations countries. And, after President Roosevelt’s death in 1945, she served on the planning committee for the Franklin D. Roosevelt Historic Site and on the board of advisors for the Franklin D. Roosevelt Presidential Library.

In 1948, C. Mildred Thompson retired from the college after 25 years as dean. Upon Thompson’s retirement, President Sarah Gibson Blanding said, “Vassar College has been unusually fortunate in having her as dean for so many years. She had contributed generously to the direction of the college and to its educational growth. Through her active interest and participation in community and in national affairs, she symbolizes the best in the long tradition of Vassar alumnae as public-spirited citizens.” But Thompson’s departure from Vassar did not mark her departure from the world of education. From 1948-1952, she served as a consultant in education and as professor of history at University of Georgia. University Chancellor Harmon W. Caldwell said, “To have so distinguished an educator and scholar as Miss Thompson affiliated with the faculty of the University of Georgia, constitutes a significant milestone in the academic development of this institution.” In 1952, she resigned her position at the University of Georgia and then went to Strasbourg, France, where she served for a year as as dean of women at the Free Europe University in Exile, an American-run university for young people from Soviet-bloc countries.

In 1963, an anonymous donor created the C. Mildred Thompson lectureship, and the first lecturer was Southeast Asia specialist and author Dr. Virginia Thompson Adloff ’24. Dean Emeritus Thompson attended the lecture and, meeting President Simpson and Mrs. Simpson for the first time, presented the president with an antique chain to be worn by Vassar presidents with the Vassar College seal. Writing to her, shortly after the event, President Simpson thanked C. Mildred for the gift— “On official occasions the President of Vassar College for generations to come will wear it with pride”—and he added, “Mary and I thoroughly enjoyed your visit and the opportunity of coming to know Vassar’s famous Dean Thompson—a distinguished scholar!”

C. Mildred Thompson died in Atlanta on February 17, 1975, at the age of 94. The Vassar history department presented a symposium in her honor on November 6 and 7, 1975, with a keynote address, “C. Mildred Thompson: Teacher, Colleague, Dean,” given by historian and social activist Caroline Ware ’20, a student and, between 1925 and 1934, a faculty colleague of C. Mildred Thompson.

A Documentary Chronicle of Vassar College.