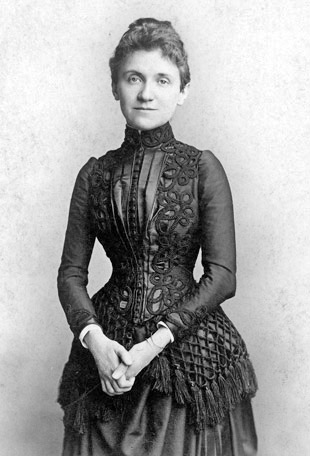 A few months after Ella Weed’s death in 1894, a Vassar alumna, Belle Ward ‘88, praised Weed in the Vassar Miscellany: “There is not one among us who is not better for having known of such a woman. One who accomplished so much in such simple deeds; simple, yet in their very simplicity most great.” Weed made her influential and progressive work in education seem simple because she was so eminently successful. She dedicated her life to advancing and developing higher education for females, working at nascent women’s institutions to carve out a broader educational space for women and prove that they have the same intellectual capacity as men.

Born in Newburgh, NY, on January 27, 1853, the eldest of the four children of Jonathan Noyes Weed and Elizabeth Merritt Weed, she attended Hannah M. Parkhurst’s Boarding and Day School and Miss Mackay’s in Newburgh before entering Vassar in 1869. At Vassar, Weed was an effective member of the Vassar Miscellany staff according to the New York Tribune, which reported in an appreciation at the time of her death that she “had much to do in establishing a good reputation for the paper.” At Vassar, Weed formed a lasting friendship with Anne Brown ’74, with whom she maintained close ties throughout her life and with whom she worked for 10 years. According to Brown, Weed was popular at the college and, as the class prophet at Commencement, “her class so proudly chose her as their Sybil.” She graduated with honors in 1873.

After graduating, Weed taught at a college preparatory school for women in Springfield, Ohio. In the early 1880s, she moved back to Newburgh for family reasons and taught at her former school, Miss Mackay’s, for a brief period. She then moved to New York City and began working with her Anne Brown at Miss Brown’s School for Girls, first as head of the educational department and later as principal of the school. Although Smith College offered her a teaching position, she refused, preferring to maintain her post at Miss Brown’s School.

In the mid-1880s, Weed became interested in the work of Annie Nathan Meyers who— inspired by the success of Arthur and Stella Gilman’s Harvard Annex—sought to develop a women’s annex to Columbia: Barnard College. Meyers hoped to “win for New York women what Arthur Gilman had won for those of Boston.” Dissatisfied with Columbia’s Collegiate Course for Women, which allowed women to enroll in Columbia courses but prohibited them from attending lectures, Meyers wanted to carve out a space where females could have access to the same education as male students, lectures and all.

Sharing Meyers’s hopes for a higher education institution for women in New York City, Weed offered up a list of influential contacts from the Anne Brown School, helping Meyers gain enough signatures to petition Columbia’s Board of Trustees for the creation of Barnard.

Meyers’ petition was accepted and in September 1889, Barnard opened its doors for the first time at 343 Madison Avenue. Weed continued working at Anne Brown’s school but also held important positions at Barnard from 1889 to 1893. She served on Barnard’s first board of trustees, worked in the public relations and fundraising departments, was appointed chairman of the academic committee and acted as a dean under Reverend Arthur Brooks, Barnard’s chairman of the board. Weed was determined to make Barnard a high-level institution with the same academic standards as Columbia. The dictionary of Notable American Women provides an elucidating account of her approach to female education:

“Miss Weed’s educational philosophy deplored the prevailing finishing-school character of women’s education. Her policies at Barnard were the practical expression of her belief that women could gain full intellectual standing only if their education were equal to men’s in rigor. In spite of the scarcity of preparatory training for women in Greek, Miss Weed insisted on Greek for entrance to Barnard, matching an identical entrance requirement at Columbia College. Her vigorous adherence to the principle of breadth before specialization led to Barnard’s refusal of special students in all but the sciences, in contrast to the greater leniency at the Harvard Annex.”

She further demanded that Barnard accept no transfer students so that the first graduating class would be fully representative of the educational standards of the college. To ensure that Barnard maintained the same high standards as Columbia, she demanded that “Columbia have advisory power over all instruction at Barnard” and gained the support of Columbia’s all-male administration and faculty. However, Barnard had some autonomy, appointing a number of its own faculty members including the botanist Emily L. Gregory, who was hired as Barnard’s first professor in 1890.

In Barnard’s initial years there was no “Lady Principal” such as Weed had known at Vassar in the formidable person of Hannah Lyman, but she is generally recognized as its head or “guiding spirit,” a fact reflected in her heading Barnard’s official list of past presidents. In honor of her work for the college, Barnard constructed the Ella Weed Memorial Room in the late 1890s, funded by a series of academic readings given by Columbia and Barnard professors from February through April 1898. Her pupils at Anne Brown’s School also founded the “Ella Weed Scholarship” at Barnard College in 1894 to commemorate her influential role at the college.

Throughout her career, Weed maintained close ties with Vassar. Along with Anne Brown, she regularly opened the doors of Miss Brown’s School for Girls to host New York alumnae events for the development of various projects on campus. Weed was also a regular attendee at Vassar alumnae meetings, serving as the president of the Associate Alumnae of Vassar College (AAVC) for three terms—1876, 1877, and 1879—and staying involved in later years by giving lectures at alumnae events, such as a highly lauded lecture on Barnard College’s conditions, goals and prospects delivered at a meeting in 1891 in Boston.

Weed’s dedication to promoting female higher education and the time and effort she put into her work for Anne Brown’s school, Barnard and the AAVC prevented her from pursuing what her friends and colleagues referred to as her “literary ambitions.” Her only published book during her lifetime, The Foolish Virgin (1883), a satirical novel describing a Vassar graduate’s attempts to disguise her education, was the first American novel to “appear in Harper’s Franklin Square Library” according to the New York Tribune. Pearls Strung by Ella Weed, published as a posthumous tribute in 1898 by her close friend Anne Brown, is a compilation of Weed’s “merry squibs, her versatile epigrams, her remarkable letters” and her favorite poems and quotations. Brown’s praises her dedication as well as her “fancy”:

“I owe her so much for the unbounded help and stimulus she always gave to me and to my girls during the ten years she worked in my school, that when I realized that a birthday gift she had half jokingly given me one year (chance lines chosen as her fancy dictated), copied in her own strong, unique hand-writing, was the only complete work she had left, I felt it was selfish not to share it with the many, many others who loved and admired Ella Weed.”

Ella Weed died in her home in New York City on January 10, 1894, of “nervous prostration,” likely induced by overwork. In the preface to Pearls Strung, Anne Brown quoted the praise by Weed’s close friend, the author, editor and literary critic William Crary, of her work as a pioneer of education: “She directed her special effort to the preparation of girls for college, believing or indeed knowing, the lasting advantage, the self-reliance and sense of power and security inherent in ‘higher education.’” Ella Weed’s achievements as an academic innovator are commemorated along with those of fellow alumnae and educational pioneers Christine Ladd Franklin ‘69, Ellen M. Liggett ‘69, Abby Leach ‘85 and Ethel Moore ‘94 in the Memorial Room of the Vassar Chapel.