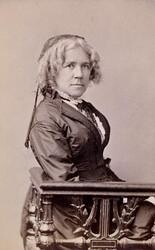 Maria Mitchell, one of the first professors hired for the nascent Vassar College, was sought by Matthew Vassar to lend luster to Vassar’s nine-member faculty. Mitchell (1818–1889) had already gained a world reputation in astronomy when, while “sweeping” the skies of Nantucket with a telescope in 1847, she had discovered and reported a “telescopic” comet, one too distant to be seen with the naked eye. The comet was subsequently named for her, and for her discovery she was awarded a gold medal by the King of Denmark, who had offered a prize for such first identifications of telescopic comets.

One of ten children born into the Nantucket Island Quaker household of William Mitchell, an accomplished amateur astronomer and a colleague of William Cranch Bond, the first director of the Harvard College Observatory, she pursued astronomical and mathematical studies with her father. In light of her accomplishment, she became the first woman elected into membership,in 1848, of the American Academy of Arts and Sciences and, in 1850, of the American Association for the Advancement of Science.

Mitchell and her widowed father moved into the Vassar Observatory, the first building of the college to be completed, in the summer of 1865, and the college opened that fall. Mitchell’s observatory was equipped with a 12-inch telescope, the last telescope by the celebrated New York telescope maker, Henry Fitz. and second in size in America only to those at Harvard and the Dudley Observatory at Schenectady and the equal only to those at Hamilton College and the University of Michigan.

Her students did original research and studied the heavens from the dome at the top of the observatory. Breaking any conventions that her astronomy students had previously had about nocturnal behavior, her classes were aroused from their sleep in their bedrooms in Main Building and made their way over to the observatory in the dark to ascend to the dome, or the roof of the building, and study Jupiter or Saturn (Mitchell’s two favorite planets, according to her successor and former student, Mary Watson Whitney ’68).

Mitchell published the findings of her students along with her own, sometimes in Silliman’s Journal, the pioneering American scientific journal established at Yale in 1818 by Benjamin Silliman, and on other occasions in the Nantucket or Poughkeepsie papers. She constructed an apparatus for making photographs of the sun and preserved the plate of the photographs in a closet in the observatory–where they were rediscovered during a housecleaning in 1997, in place, and labeled in her own handwriting. Her students used the Morse telegraphy instrument invented and given to them by Samuel F. B. Morse, a neighbor of the college and one of its original trustees.

In 1869 Mitchell travelled with seven of her students to Burlington, Iowa, to see a total eclipse of the sun. As was later observed in The Great Experiment, A Chronicle of Vassar History, “the students’ observations were printed in the official report of Professor J.H.C. Coffin, Superintendent of the American Ephemeris and Nautical Almanac, who directed the various observers of the eclipse.” Under Mitchell’s tutelage, these students, after just two or three years of scientific study at Vassar,were accurately recording their observations in a joint experiment that would reach a national scientific audience. At a time when men’s colleges seldom engaged science students with direct field experience of this kind, her students were entering the new era of learning for women envisioned by the founder; Subsequently, on July 28, 1878, Mitchell and five of her students were the official observers of an eclipse near the Indian territory in Denver, Colorado.

Mitchell used her observatory dome not only for the study of science, but also as a gathering place for the discussion of politics and women’s issues. On May 10, 1875, Julia Ward Howe, Maria Mitchell’s guest (and composer of the Civil War anthem “The Battle Hymn of the Republic”) lectured in the observatory on “Is Polite Society Polite?” One of Mitchell’s popular traditions was her annual “dome party,” which took place for the first time on June 16, 1870. On that occasion Mitchell introduced a game in which everyone took turns in writing poems on scraps of recycled paper. One poem that day was composed by Mitchell and addressed to Mary Mineah, an undergraduate student, on her 24th birthday.

Other of her poems portrayed other students:

Some rhymes are fitted by Eleanor Clark

But such rhymes as Bark and Cark

These are not for Eleanor Clark,

Some rhymes are fitted to Eleanor Peirce

But such words as curse and worse

These are not for Eleanor Peirce.

In June 1883 these verses were arranged to imitate the words of Auld Lang Syne:

Should Patty Hillard be forgot, In Vassar’s sacred hall?

While Vassar lives at all.

For Vassar’s sake we sing

While Saturn’s ring is poised aright

The five who watched them many a night

Will not from memory go.

Songs such as “Annie Laurie,” “Captain Jinks of the Horse Marines,” “Araby’s Daughter,” “Maid of Athens,” and “The Light Guitar” lent themselves similarly to such occasions.

At times, Mitchell reluctantly but very effectively turned some of her attention to raising funds to support the Observatory. In early 1886, for example, “monied tightness,” as she put it in a letter to her San Francisco friend, Abby Hutchinson Patton, led her away from the “quiet life of scientific speculation” to “beg money for the Observatory,” which she feared would be forced to close. Abby Patton, descended from a family of famous singers and well known in the art herself, had, Mitchell said, “sung once, from your sick room, for the Observatory. Do not sing again, but please, talk & preach & beg! Go to every rich man in San Francisco & beg!” She told Patton, “In this emergency the New York alumnae, 100 strong, have voted to give about $10,000, (if the Boston alumnae concur). This money is raised. The Boston alumnae have asked me (poor me!) to beg for more!” Indeed, she said, their mutual friend, the Quaker patriarch and philanthropist Charles F. Coffin, replied when she asked him for $50,000, “Thee is right Maria Mitchell—never beg by retail. Beg by wholesale.” Clouds of disgrace were circling Coffin at this time, so Mitchell’s quest took her to the famously rich and fabulously stingy Quaker heiress and business woman Hetty Green and to John D. Rockefeller—not yet, with his family and colleagues, a major donor to the college—both of whom turned her down. In the end, letters from Mitchell to alumnae and literally hundreds of friends such as Patton, the poet John Greenleaf Whittier, the reformer Dorothea Dix and countless others raised $30,000, and the Observatory was saved. “Personally,” she had written to Abby Patton about the crisis, “this is little to me. I am too old to stay at Vassar much longer. But I dread to see an effort which has been made for women for twenty years die of inanition.”

In 1906 three of Mitchell’s students were named in James M. Cattell’s first listing of American Men of Science: Antonia Maury ’87; Professor Mary Whitney, ’68, MA ’72; Dr. Christine Ladd Franklin, ’69—the only woman ever to get an honorary degree from Vassar and the first to earn a PhD from Johns Hopkins. Mitchell became very much involved in early women’s suffrage organizations, and when elected the second president of the American Association of Women (AAW) in 1875, she held meetings in the Vassar dome attended by well-known suffragists.

Mitchell’s announcement of her intention to retire at the end of the academic year in 1888 led to an offer from the college of continued college residence and use of the Observatory, and encouragement from colleagues and former students to remain. “You will consent, you must consent to having your home here, and letting the work go,” a colleague wrote. “It is not astronomy that is wanted and needed, it is Maria Mitchell….The richest part of my life here is connected with you….I cannot picture Vassar without you. There’s nothing to point to!” However, after 28 years at Vassar and at the end of her career, she returned to Lynn, Massachusetts and lived for only one more year, dying among her family on June 28, 1889. A few weeks earlier a former student had written to her, saying,   “In all the great wonder of life, you have given me more of what I have wanted than any other creature ever gave me. I hoped I should amount to something for your sake.”

This bond between professor and student was reflected in a poem Maria Mitchell composed in 1868 when three of her first students, Sarah Glazier, Mary Watson Whitney, and Sarah Louise Blatchley, were graduating and she saw them to their train:

Sarah, Mary, Louise, and I

Have come to the crossroads to say good-bye;

Bathed in tears and covered with dust,

We say good-bye, because we must;

A circle of lovers, a knot of peers,

They in their youth and I in my years,

Willing to bear the parting and pain,

Believing we all shall meet again;

That if God is God and truth is truth,

We shall meet again and all in youth.

“We Are Women Studying Together,” A Videotape by James Steerman and Elizabeth Daniels, Vassar College Archives.