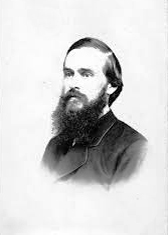 Vassar’s first professor of natural history, Sanborn Tenney, was born on January 13, 1827, in Stoddard, New Hampshire. He attended Amherst College from 1849–1853, where he was a devoted student. As the 1922 Williams Alumni Review noted, “his college room [was] turned into a museum of collections in the various fields of the subject. His holidays and leisure hours were spent in fields and in the study of scientific collections.” After graduating from Amherst, Tenney studied geology and zoology at Harvard University with the famed naturalist Louis Agassiz. Their professional and personal relationship lasted until Agassiz’s death in 1873.

After Harvard, Tenney taught natural history in district schools and normal schools throughout Massachusetts. He published his first textbook, Geology: For Teachers, Classes, and Private Students, in 1859, the year in which Charles Darwin published his theory on evolution and natural selection in On the Origin of Species. Tenney was an avid creationist, and his opposition to Darwin’s theory came to define both his own work and that of his mentor and friend Agassiz. This opposition also played a large role in his becoming one of Vassar’s first professors.

Matthew Vassar wanted the best in each field to teach at his college, but much of the contemporary scientific community saw Darwin’s theory as heresy, and the early Vassar community was little different. Vassar wished to ensure that his first professor of science was both eminent in the field and an opponent of Darwinism. Beginning in 1861, President Jewett, and later, President Raymond engaged Tenney in a four-year correspondence largely to convince themselves that he was the right person. Responding to a letter written from Jewett, apparently inquiring as to whether he was a proponent of Darwin’s theory, Tenney wrote:

“Your friend’s question as to whether I am infected with infidel theories created some amusement among my friends at the dinner table today; since this is the first time, so far as we are aware, that any queries were raised in regard to my Orthodoxy. Seriously, my private character, and my public teaching must answer the question as to whether I have infidel notions. I can assure you…that all fears in regard to my unsoundness can easily be removed.”

Tenney made it through the protracted vetting process. President Raymond, who succeeded Jewett in February 1864, wrote of Tenney in a letter to his wife later that year, “I cannot tell you how much I like him. He is…clear-headed, sensible and modest, earnest in his work…. Set him down as sure for an appointment.” In 1865, Tenney became the first professor of natural history at Vassar College. During his first year, he taught all of the courses in the department, which included geology and physical geography, botany, and zoology. In his second year, however, Mandana M. Shattuck, who had been a special student under Tenney during his first year, was appointed teacher of botany.

Tenney was a popular professor and a dedicated educator. A letter describing her discovery of a moth by Ellen William, a special student in 1865–1866, illustrates his encouragement of students: “When I showed it to Prof. Tenney he said it was quite a rare specimen and one that he had never caught any of— He thought it very fine and gave me the name. I have another not quite so large but very handsome. My collection is growing quite fast and I have some very pretty little butterflies.” His 1866 work, Natural History of Animals, was written for the express purpose of aiding “parents and teachers in interesting the young in the delightful and important study of Natural History.”   During the same year, Tenney also published a revised edition of Geology, in which he directly addressed the theory of evolution:

“It has been a favorite notion with many people, and some philosophers, that the higher animals are only the results of continued improvements on the lowest form of life. Our science shows this notion to be entirely false. Animals of the four great types appeared upon the earth in profusion simultaneously. Hence neither branch, nor type, could be developed from another…Each succeeding race bears the impress of the original idea, yet it is an entirely new creation. Nature has not repeated herself, but everywhere is the great diversity consistent with unity.”

Although he was quite popular and appeared to have enjoyed teaching at Vassar, Tenney left the college in 1868 to become the professor of natural history at Williams College, where he stayed until his death in 1877. During his time at Williams, Tenney wrote prolifically, publishing a number of books and essays on natural history and co-authoring a few books with his wife, Abby Tenney, including the children’s book, Pictures and Stories of Animals for the Little Ones at Home, published in 1869. Reading Tenney, one is immediately struck by his sincere love of nature and his belief that all of nature is a product of the hands of God. Both qualities inform this passage from Elements of Zoology, published in 1875:

“Especially is the science of Zoology important as an educational branch, securing to its true and faithful votaries a spirit of earnest inquiry, habits of patient and accurate observation, careful comparison, vigorous and logical thought, and power of broad generalization; and dealing, as it does, with the highest expressions of matter and of life, its study is eminently adapted to enlarge our ideas of creation, and of the Great Author of Nature. It reveals the plan which the Creator has made and carried out in the highest department of nature—the Animal Kingdom.”

Elements of Zoology demonstrates Tenney’s great attention to detail; in addition to giving a painstakingly thorough and precise description of the varieties of life on earth—from the vast species of birds, to the unimaginable number of microscopic life forms—he also goes into great detail describing, to the best of his abilities, the musculature and associated biochemistry of a number of organisms. Elements of Zoology depends on observations of the underlying similarities across species that define Darwin’s Origins, but unlike Darwin and the other early evolutionists, Tenney believed that the patterns revealed, not the constantly evolving trail of a common ancestor, but the omnipotent hand of God.

In 1877, Tenney was at his sister’s home in Buchanan, Michigan, en route to lead a party of Williams College students on an expedition to Colorado, when he suddenly fell ill and died on July 9, 1877. Tenney had been a very popular professor at Williams, and the president of Williams, Paul A. Chadbourne, said in his memorial address:

“He was a Christian man, — true, kind, faithful, courteous in all the relations of life. Well will it be for the college if a man shall be found worthy to fill his place; well for the students to have such an instructor and model of true manhood; well for the faculty to have so safe an advisor, so kind and genial a member in all the responsibilities of college administration.”

By challenging evolutionary theory, Tenney and his creationist contemporaries raised new questions that evolutionary biologists were forced to answer seriously, with innovative answers. These early opponents of evolutionary theory actually helped to solidify the theory within the scientific community by forcing early proponents to address issues and fix problems within the theory, eventually leading to the thorough and mature version of the theory that exists today. Although it probably would be of mixed comfort to him, the arguments of Tenney and the other early opponents have proved to be invaluable to modern science. And, ironically, his successor at Vassar, James Orton, an eminent inventor, explorer, and naturalist and himself a graduate of Williams, was not only a disciple but also a friend and correspondent of Darwin.