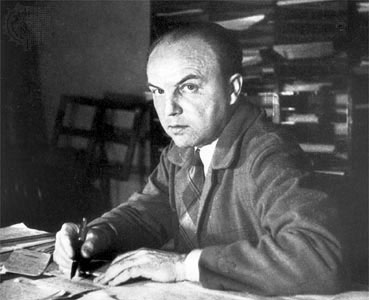 Born in Vienna at the dawn of the twentieth century, the composer Ernst Krenek (1900 – 1991) began his career in the musical salons of Weimar Berlin and ended it half way across the world in the recording studios of Southern California. Already composing pieces for piano before he was ten, the young Krenek caught the eye of the influential conductor and modernist composer Franz Schrecker, who took the him on as a student. Serving in the Austro-Hungarian army in the First World War, he was conveniently stationed in Vienna, where he was already studying composition.

The early 1920s proved a prolific period for Krenek; between 1921 and 1924 he wrote 18 works, several of them operas. He débuted his first string quartet in 1921 (Op. 6), garnering over fifty reviews and establishing himself as a prominent newcomer in the modern music scene. His operas included Die Zwingburg (1922), Der Sprung über den Schatten (1923), and Orpheus und Eurydike (1923), the last in collaboration with the Austrian artist, poet and playwright Oskar Kokoschka.

In 1922 he met Anna Mahler, the recently-divorced daughter of the late composer and conductor, Gustav Mahler. Their ensuing courtship may have seemed particularly appropriate to Krenek, who confided to his journal his aspiration to “become the successor of Mahler in the field of the symphony.” He refused, however, when Anna asked Krenek to finish her father’s incomplete Tenth Symphony. The couple married in 1924 but were divorced less than one year later.

Krenek composed what many consider his magnum opus, Jonny spielt Auf (Johnny Strikes Up), when he was 25. Premièred in 1927 in Leipzig, the opera was an overnight sensation. One of the most popular operas of the century thus far, Jonny spielt Auf enjoyed productions in opera houses across the world and translations into 18 languages. Krenek was now a famous composer.

But Krenek’s use of an African-American character infuriated the burgeoning Nazi movement, which emphasized racial purity and sought to purge art of its “impure” or foreign elements. Furthermore, some critics called Jonny the first “Jazz opera,” and Jazz music, with its non-German origins, insulted the nationalist sensibilities of the Nazis.

In 1934, Krenek finished the first ever full-length twelve-tone opera, Karl V, about the sixteenth-century ruler, Holy Roman Emperor Charles V. Seeing the tide of Nazism threatening to inundate his Austrian homeland, he set out to write a piece that was, in his own words, “explicitly anti-Nazi, pro-Austrian, and Catholic.”

When the overwhelming Nazi influence in Austria cancelled the 1934 Vienna production, Krenek partly attributed the cancellation to his use of Arnold Schoenberg’s twelve-tone system, which he deemed “the musical technique that the tyrants hated most of all.” In his memoir, Horizons Circled (1974), he wrote, “Knowing that my name was on the blacklists of Germany…and sensing that Hitler would soon take over my homeland, I decided in 1937 to emigrate to the United States.”

Bidding farewell to their friends and family in Europe, several of whom they would never see again, Krenek and his new wife, Berta, set sail for America. In the fall of 1938, Krenek landed his first teaching position in Boston at cellist Joseph Malkin’s Malkin Conservatory. Unhappy with the school and its students, he subsequently interviewed for a vacant position in the Vassar College Music Department, accepting in February 1939 chairman George Sherman Dickinson’s offer of a two-year, full-time appointment with a generous annual salary of $4,000. In offering Krenek the job, however, Dickinson issued a subtle warning about teaching at Vassar: “The great proportion of students studying music here do so as cultivated amateurs. It may be said, therefore, that very little work of a highly advanced nature finds a place here.” Ignoring Dickinson’s rhetoric, Krenek happily made arrangements to move with Berta to Poughkeepsie.

Krenek began teaching at Vassar in 1939, charged with teaching three courses in theory and composition, supervising senior theses and playing in faculty concerts.

He and Berta settled comfortably into faculty housing on campus, and Krenek quickly made friends at Vassar, among them President Henry Noble MacCracken, who extended to him the honor of an invitation to the monthly “Potluck” dinner club, a select group of eight faculty members who dined with the President and discussed scholarly papers of the day. By all accounts, Krenek adored his newfound home in Poughkeepsie and planned on staying indefinitely.

Ernst Krenek enjoyed teaching his Vassar students and believed strongly in music education. He wrote, “I believe that the task of enlightening the minds of American youth is not only most exciting but also very important, because the future of music will on the whole rest upon the insight and the enthusiasm of the coming generation of Americans.” His students seemed to reciprocate his enthusiasm, and he quickly became one of the most popular music instructors at Vassar. His European fame notwithstanding, Krenek’s classroom style was said to be engaging and inspiring.

At Vassar, Krenek met the playwright-in-residence at the college, Poughkeepsie newspaperman and writer Emmet Lavery, who agreed to write the libretto for Krenek’s chamber opera, Tarquin, centered around a Hitleresque tyrant. On May 13, 1941, Tarquin saw its workshop debut at Vassar, with President MacCracken playing the ancillary role of the Archbishop. Krenek’s twelve-tone score, however, proved too difficult for the Vassar musicians, limiting the work’s performance to only two scenes. Never published in Krenek’s lifetime, the opera was prémiered in Cologne, Germany in 1950.

Krenek continued to compose music while living in Poughkeepsie. Writing pieces for the college choirs and chamber ensembles, he found additional inspiration elsewhere in Skinner Hall of Music, in the “magnificent music library in which I loved to browse,” he later recalled. The library’s collection of medieval and Renaissance music captivated Krenek, particularly the work of Johannes Ockeghem (c. 1420–1497), an early Renaissance composer in whose style Krenek found a kindred spirit.

“I looked,” he said, “for prototypes of my own compositional procedures and eventually I found astonishing parallels.” Krenek’s investigation of the Ockeghem papers prompted book on his creative muse, Johannes Ockeghem (1953), as well as what many critics regard as his best choral work, Lamentatio Jeremiae prophetae, op. 93 (Lamentations of Jeremiah), which he wrote in 1941 and 1942.

Most of the material in the “magnificent music library” that so intrigued Krenek happened to have been acquired by George Sherman Dickinson on sojourns through Europe in the twenties and thirties, and he considered the material his personal collection, not a source of musical and scholarly inspiration for his young, albeit internationally renowned, colleague. “My boss, a hide-bound musicologist,” Krenek said about his fascination with the library’s rare gems, “did not like it at all.”

In December of 1940, Dickinson chided Krenek and three colleagues for their students’ preparation for Dickinson’s own advanced courses. He ordered the teachers to “review our work with a view to producing a well-grounded and liberal musical culture, before attempting to concentrate upon the production of composers and musicologists.” Krenek responded that the sort of teaching Dickinson sought would result in “dull, unenlightened craftsmanship.”

The incident echoed Dickinson’s ominous warnings when he offered Krenek the position at Vassar: that most Vassar students approached their work as “cultivated amateurs” and that he should therefore expect “very little work of a highly advanced nature.” Krenek expected to be reappointed after his initial two-year contract, but later that same month, over Christmas break, a letter came from Dickinson reporting that the department had unanimously voted against his reappointment. “The specialized aspect of contemporary music which you so enthusiastically and forcibly represent,” the chairman wrote, “has little place in the curriculum of an undergraduate college such as Vassar.”

The news stung Krenek profoundly, especially when, in all likelihood, war in Europe seemed inevitable. Desperate, he appealed to his friend President MacCracken, who ruled in early 1941 that Krenek must be allowed to stay at least for a third year, as the department had not given him sufficient notice. Despite MacCracken’s decision, the music department still refused to vote for Krenek’s reappointment.

Feeling he could not, despite his admiration for Krenek, overrule the decision of an entire academic department, MacCracken convened a meeting of the trustees to settle the matter. Although MacCracken and several students spoke in support of Krenek, the trustees, too, refused to overrule the music department. By the winter of 1942, Professor Krenek knew he would have to depart Poughkeepsie after that year’s Commencement.

Now the catastrophe here is complete. These people at the Music Department have rejected not only the President’s plea, but also the recommendation of the Advisory Committee, everything. It is the most humiliating defeat… for the moment, I am ruined.

But even amid the setbacks at Vassar, Krenek never stopped composing and publishing. Indeed, he developed one of his most important musical ideas at Vassar: the “rotation” method, that took Arnold Schoenberg’s twelve-tone system and expanded on it, using the idea of an “escape hatch” within each twelve-tone “row” of music. By rotating the first note of Row 1 to the last note of Row 2, Krenek believed he could, in his own words, “develop a richer palette of harmonic hues” in his compositions; indeed, the “rotation” device would influence much of his subsequent work. Also at Vassar, Krenek wrote and published Studies in Counterpoint: Based on the Twelve-Tone Technique (1940), a short textbook-like volume that outlined his modernist approach to counterpoint. According to lore, Igor Stravinsky read Krenek’s little book when the eminent Russian composer decided to experiment in twelve-tone music.

In the fall of 1942, Krenek found new employment at Hamline University in St. Paul, Minnesota. He was, understandably, overjoyed at his new position: chairman of the music department; he was the boss now. The appointment was lucky for another reason. The eminent Greek conductor Dimitri Mitropoulos, who led the nearby Minneapolis Symphony Orchestra, showed a great interest in Krenek’s work. Mitropoulos, perhaps more than any American conductor at the time, performed and premiered twelve-tone music, and he was influential in garnering Krenek’s music a larger national audience.

Krenek became an American citizen in 1945, and two years later he moved to Los Angeles. With his third wife Gladys, he lived almost all of the rest of his life in California, composing music—occasionally electronic music—and helping the University of California at San Diego form its Music Department.

After the war, he received several European honors: the silver medal of Austria; the gold medal of Vienna; membership in the Berlin Academy of Arts; and membership in the Austrian State Academy of Music. In 1975 he won the Austrian Cross for his work. In his adopted country he was inducted into the American Academy of Arts and Letters in 1960. In 1986, the First Annual Krenek Prize for Composition was established in his native Vienna, and the Krenek Institute of Vienna opened its doors in 1998.

Ernst Krenek returned to Vassar in October 1981 when, as part of a celebration of the 50th anniversary of the opening of Skinner Hall, he joined a public conversation with Professors Richard Wilson and Robert Middleton prior to a concert in Skinner of his works. He died on December 22, 1991 in Palm Springs, California.

Krenek, Ernst. “A Composer’s Influences.” Perspectives of New Music 3, no. 1