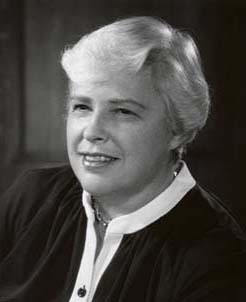 Eight years after Vassar became coeducational, Virginia B. Smith became its eighth president. Smith brought to Vassar the expertise she had garnered from her previous careers as a lawyer, economist, and educational policy maker, strengthening Vassar’s administrative networks and leading the greatest funding drive in the college’s history.

Virginia Beatrice Smith was born in Seattle, Washington in 1923 and entered the University of Washington at 16, where she received her B.A., M.A., and J.P. degrees. After completing postgraduate studies in law and economics at Columbia University, she returned west to practice law in California as an arbitrator in labor-management disputes. From 1947 to 1952 she taught business and economics at the College of Puget Sound and at Seattle Pacific College, and from 1952 taught various interdisciplinary courses on labor and management at the Institute of Industrial Relations at the University of California at Berkeley. Smith joined the administrative staff of the college in 1958, and in 1965 became the assistant vice president. In 1967, she began working with the Carnegie Commission on Higher Education, and served as its assistant director from1971 to 1973. During her time on the board, the commission recommended the establishment of a federal funded National Foundation for Higher Education. Smith became the first director of the Fund for the Improvement of Postsecondary Education (FIPSE) in 1973, which provided support for projects to improve undergraduate education.

By the time Smith became Vassar’s president in 1977, she was well known and respected as a successful administrator and authority on higher educational policies. In 1975 Change magazine named Smith one of the 44 most influential people in the field of higher education. Smith’s view on running an academic institution reflected her previous profession as an educational policy maker: “A president must act as a mediator or like the mayor of a city. The president should not be a catalyst for change, not leading, not employing politics, but reinforcing [them].” Noting an increasing trend of purely vocation-oriented education, Smith proposed to make the liberal arts education “truly meaningful.”

At Vassar Smith proposed and brought into fruition several innovative programs which gave greater national recognition to not only Vassar but to the great potentiality of the liberal arts education. These programs included the President’s distinguished visitor program, a summer program, and the development of a manuscript collection. Smith reorganized and strengthened the college’s administrative and academic offices, and improved endowments to raise the faculty’s salaries and to finance their travel for research. Smith was also committed to raising more money for the college; by her resignation from Vassar in 1985, $76 million had been raised, and $24 million more expected by the end of the 80’s, a milestone for a president of Vassar.

On October 21, 1978, several Vassar students stormed into a board of trustee meeting to protest the college’s investments with five companies doing business with South Africa, which was known to advocate a policy of apartheid. The students were tried by the college’s judicial committee, and there was much remonstration by the campus body over their right to know of Vassar’s investments. In response, Smith formed a Campus Committee on Investor Responsibility. In 1985 the Board of Trustees unanimously accepted a gradual South Africa divestment policy.

Smith retired from Vassar in 1985, stating that most of her goals for the college had been accomplished or on their way, and looking forward to “undertak[ing] new projects involving research, writing, and teaching.” Although Smith’s tenure was short, her ideas about an effective liberal arts education, and the policies needed to advance one, were progressive and relevant to the changing milieu of the world and of Vassar. In 1990 Smith came out of retirement for a year to serve as the acting president of Mills College, an all-women school, whose board of trustees had recently rescinded the college’s decision to become coeducational.

A leader of remarkable strength and character, Virginian Smith—who, when asked by the New York Times why she had been chosen from among 450 candidates to be Vassar’s president, answered “Because I was the best qualified”—died in Alamo, CA, on August 27, 2010, at the age of 87.

“Vassar College and its Eight Presidents, 1861-1986: An exhibition prepared to honor Frances D. Fergusson on the occasion of her inauguration as the ninth president of Vassar College.” October 11, 1986.