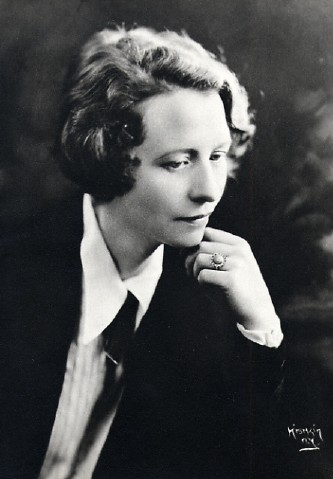 In the summer of 1912 at an evening party in Maine, a young woman with light red hair was asked to recite some of her poetry to the guests. “All I could see from where I stood; Was three long mountains and a wood…” she began. By the time the poem, “Renascence,” was finished she had impressed one guest, Caroline B. Dow, enough for her to encourage the young poet to apply for a scholarship at Vassar and to promise to provide the money for any other expenses as well. The poem that brought the young woman a chance to go to college brought her to national attention when it was published in the poetry anthology The Lyric Year (1912) where it won fourth prize out of 10,000 entries. The poet who composed the piece, called “Vincent” by her family and close friends, was Edna St. Vincent Millay.

Born in Rockland, Maine, in 1892, the eldest of three daughters all raised by their mother, Cora, a working nurse and enthusiast of the arts, Millay read and wrote voraciously throughout her childhood, and she was recognized from her earliest years for both her intelligence and her willful spirit. As she grew up, Edna St. Vincent Millay would be recognized as a truly independent woman, becoming the first woman to win a Pulitzer Prize for poetry, a vocal feminist, an activist and openly bisexual.

Before beginning at Vassar the 21-year-old poet spent a preparatory semester at Barnard, and in the fall of 1913, she matriculated into the class of 1917. The regulations of college life as well as her three to four year seniority over most of those in her class made adjustment to Vassar difficult for Millay. She gained a reputation for breaking many of the college rules and often found herself before the new president, Henry Noble MacCracken, for discipline. President MacCracken punished Millay with reprimands and limited privileges for her infractions, but he also respected the talent and intelligence he saw in the young woman. He once told her that no matter how she might flout college regulations, he wouldn’t expel her because he didn’t want another “banished Shelley” on his hands. To this Millay replied, “On those terms, I think I will continue to live in this hell-hole.”

In an interview in 1966, MacCracken remembered an incident that clearly reflected his relationship with the young poet:

In those days students could absent themselves whenever they pleased and just send in a sick excuse. I stopped her in the hall one of those times and said, “Vincent, you sent in a sick excuse at nine o’clock this morning and at ten o’clock I happened to look out the window of my office and you were trying to kick out the light in the chandelier on top of the Taylor Hall arch, which seemed a rather lively exercise for someone so taken with illness.” She looked very solemnly at me and said to me, “Prexy, at the moment of your class, I was in pain with a poem.” What could you do with a girl like that?

Excerpt of “Renascence” from Renascence and Other Poems:

For all her flouting of authority, Millay found Vassar a rich environment to nurture her talent. She became a regular contributor to The Vassar Miscellany and a prominent campus songwriter. Millay wrote the prize winning song for the 1916 Founder’s Day, composed the words for the “Baccalaureate Hymn” sung at her graduation in 1917, in addition to writing songs for other campus events such as the opening of her class’s Senior Parlor in 1917. The young poet was also very involved in the dramatic life of the college, writing and appearing in a number of productions. Her play “The Wall of Dominoes” was published in The Vassar Miscellany, and in her senior year she took the lead role in her original play “The Princess Marries the Page.”

“Sonnet V” From Renascence and Other Poems

“If I should learn, in some quite casual way,
That you were gone, not to return again —
Read from the back-page of a paper, say,
Held by a neighbor in a subway train,
How at the corner of this avenue
And such a street (so are the papers filled)
A hurrying man — who happened to be you —
At noon to-day had happened to be killed,
I should not cry aloud — I could not cry
Aloud, or wring my hands in such a place —
I should but watch the station lights rush by
With a more careful interest on my face,
Or raise my eyes and read with greater care
Where to store furs and how to treat the hair.”

Just before her graduation Millay’s unruly ways caught up with her and she was suspended—meaning, potentially, she would not receive her degree. As graduation approached, members of the faculty frantically urged that the deserving, if unconventional, student receive her diploma. Finally, in response to a petition signed by 120 members of the faculty, Millay was allowed to get her degree. She was, however, forbidden to participate in any of the other commencement activities, including the singing of the “Baccalaureate Hymn” she had composed for the occasion.

In the fall after her graduation Millay’s first book, Renascence and Other Poems, was published, and she moved to Greenwich Village to pursue acting. In the Village, Millay was in the heart of a bohemian scene filled with artists and with writers like Max Eastman, Eugene O’Neill, and E.E. Cummings. Millay took part in the culture and gained a reputation in the Village. Her sister Norma came to live with her, and the sisters both supported themselves in odd jobs, while volunteering in Provincetown Players’ productions. The two made just enough to live on, and Millay stayed in the village through the early part of the 1920s.

Even though Millay never considered herself a true bohemian, her second volume of poetry, the light and rollicking A Few Figs from Thistles (1920), made her something of an icon of the Jazz Age. Works such as her poem, “First Fig” were adopted as maxims for the young men and women trying to live as freely and wildly as possible. However, Millay was more than a free spirit. Those who knew her recognized in her all the contradictions of a nuanced character. Her friend, the journalist Dorothy Thompson described her as “a whimsical genius, sometimes…petulant and imperious… sometimes…stormy, turbulent, and as unreckonable as the sea…sometimes a lost and tragic soul.” And, she added, this mercurial personality was always wrought by the “most penetrating intelligence, and the gift of evoking the most passionate and tender love.”

“First Fig” from A Few Figs From Thistles:

“My candle burns at both ends;
It will not last the night ;
But ah, my foes, and oh, my friends–
It gives a lovely light!”

Writing for Vanity Fair, Millay traveled in Europe in 1921, the year a collection of poems, Second April, and two plays, The Lamp and the Bell and Two Slatterns and a King, appeared. In Europe she continued to mix with a wide variety of artists and writers, and after two years of travel she returned to the United States and her flat in the Village. In 1923, Millay became the first woman to win the Pulitzer Prize for poetry for her collection The Harp Weaver and Other Poems.

In that year Millay met and married Eugen Jan Boissevain. Forty-three when he met Millay, the Dutch coffee importer was the widower of suffragist Inez Milholland ’09. Elizabeth Hazelton Haight ’94, Millay’s classics professor and mentor, reflecting on how the handsome and proud Boissevain handled his relationship with the strong and independent Millay, could only describe him as a “quiet power.” As Dorothy Thompson put it, he was a “husband, nurse, cook, business manager, and above all friend….”

Excerpt of “Journey” from Second April:

“Ah, could I lay me down in this long grass
And close my eyes, and let the quiet wind
Blow over me–I am so tired, so tired
Of passing pleasant places! All my life,
Following Care along the dusty road,
Have I looked back at loveliness and sighed.”

In 1925, Millay and Boissevain moved from the Village to a 600-acre farm in Austerlitz, NY, three hours north of New York City. They named the farm “Steepletop” after the steeplebush, or hardhack, that grew on the estate, and the farm’s white house remained the couple’s home until both of their deaths. Millay continued to travel, going on reading tours, and working on radio broadcasts of her poetry, but Steepletop was her primary refuge from the world. For many years after the couple moved in, they refused to even install a telephone at the estate. Featuring numerous gardens and woods, as well as a fully modernized house, Steepletop afforded Millay and Boissevain a place away from of the public eye, a home of rural but comfortable seclusion. From her beloved farm Millay published her celebrated collection of love sonnets, Fatal Interview (1931), and her subsequent collection Wine From These Grapes (1934).

Acclaimed and nationally recognized. Millay was not free from misfortune. In 1936 the manuscript for her next book, Conversation at Midnight, was destroyed in a hotel fire, and a few months later, as the poet was trying to recreate the lost manuscript, she was involved in a car accident that caused severe nerve damage to both her back and right arm. She never fully recovered from the accident and had to take painkillers for the rest of her life.

During World War I, Millay had been strong pacifist, but, in the late 1930s, as the world stood on the cusp of another World War, her politics shifted to dedicated support for preparedness and the actions of the Allied Forces. In 1940 she began writing poetry in support of the Allied war effort, and once the United States entered the conflict she collaborated with the Writer’s War Board in producing propaganda. Her chief poem from this period was “The Murder of Lidice” about the slaughter of a small German village by Nazis. The piece was broadcast with great acclaim all over Europe by short wave radio.

Excerpt of “Spring” from Second April:

To what purpose, April, do you return again?
Beauty is not enough.
You can no longer quiet me with the redness
Of little leaves opening stickily.
I know what I know.

In 1944 Millay suffered a nervous breakdown, and she temporarily stopped writing. With her husband’s support, she slowly improved, and eventually began writing again. She was, however, much more critical of her work than she had ever been before, and the accumulation of poems for her next book was a laborious process. Eugen Boissevain died in the spring of 1949, a few days after his diagnosis with lung cancer. After his passing Millay continued to work on her book, living alone at Steepletop until the fall of 1950, when she died of heart failure while sitting on the stairs. The poems she had been collecting were published posthumously in 1954 as Mine the Harvest. In the end, the young woman reciting poetry in Maine, the unruly and frustratingly intelligent student at Vassar, and the middle-aged and ardent writer who lived alone at Steepletop, will always be remembered as an innovative and passionate poet, a marked lyrical force.

“A Poet’s Passion Preserved; Steepletop, Austerlitz, NY,” The Newsletter of The Garden Conservancy. 2004, Vol. 15, No. 1

Crane, Muriel. “Vincent At Vassar Burned Candle But All With Elan and Charm.” The Miscellany News. Nov. 19, 1952