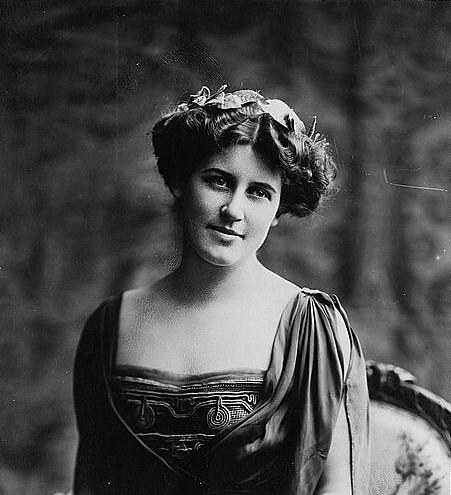 “She was avid for life, and impatient for a world fit to live in.”

An activist and social reformer, Inez Milholland was a woman willing to champion the causes of anyone—women, laborers, children, or the poor—who found themselves disenfranchised. Dedicated to social equity regardless of class or gender, she advocated and demonstrated alongside other great social reformers in campaigns of letter writing, speeches, and rallies.

Born in New York in 1886, Milholland was the eldest daughter of John and Jean Milholland. Her father, a New York Tribune reporter and editorial writer, eventually headed a pneumatic mail tube business that afforded his family a privileged life in both New York and London. Her mother provided her two daughters and one son with culture and intellectual stimulation. Trips to museums and the theater, along with a good deal of exercise, were part of the Milhollands’ upbringing.

Much of Inez’s adolescence was spent in the family’s London home, and for most of her life she carried a faint British accent, perhaps giving another nuance to the activist’s charm. In London, she attended the Kensington High School for Girls, a nondenominational private school noted for its freedom from class distinctions. The school allowed the daughters of earls to study alongside the daughters of shopkeepers, perhaps fueling Milholland’s later efforts toward class equity.

Milholland knew, that when it came time to choose a college, she wanted to study in the United States, and she decided on Vassar. When the college wouldn’t accept her certificate from Kensington, Milholland was sent by her parents to the Willard School for Girls in Berlin in order to gain an acceptable diploma. Finally, in the fall of 1905, Milholland went with her mother to Poughkeepsie and tested successfully for entrance into Vassar.

At Vassar, Milholland pushed herself hard, trying to get all she could out of her college experience with a full schedule of classes in addition to extracurricular activities. In her freshman year she played Romeo in Romeo and Juliet, the first of many roles in student productions at Vassar. Milholland also joined the Current Topics Club, the German Club and the debating team, along with the unrecognized but active Socialist Club. She helped organize a children’s court in Poughkeepsie, and she played basketball, tennis, golf, and field hockey on campus. A recognized athlete, she broke the college’s shot-put record in her sophomore year, and, in her junior year, she won the college cup for best all-around athlete, all while serving as president of the junior class. In just her first two years at Vassar, Milholland had become a distinct and engaging campus personality. An active and unconventional student, she was always looking for a new or alternative way of going about things.

“Beautiful and courageous, she embodied more than any other American woman the ideals of that part of womenkind whose eyes are on the future. She embodied all the things which make the Suffrage Movement something more than a fight to vote. She meant the determination of modern women to live a full free life, unhampered by tradition.”

The Philadelphia Public Lodger at the time of her death

The summer after her sophomore year Inez Milholland became more than an active and energetic student. During a stay in London she became an ardent political radical through her association with the aristocratic suffragette Emmeline Pankhurst. A leading member of the militant Women’s Social and Political Union, Pankhurst and her “suffragettes” had gained attention for their aggressive approach toward getting the vote. Milholland participated in a number of WSPU demonstrations in England, and when she returned to Vassar in her junior year she wrote in the Vassar Miscellany about the English suffragettes, noting the disappointing efforts of American women by comparison.

Milholland was as intent on bringing women’s suffrage to Vassar College as was Vassar’s President James Monroe Taylor staunchly opposed to any discussion of the subject. He considered it “propaganda” from which it was his duty to protect his students. Taylor cited John Raymond, the president when the college opened in 1865, as the source of his position that Vassar’s mission was “not to reform society but to educate women.” Taylor had stopped the recognized suffragist Jane Addams from giving her lecture on suffrage at Vassar even though she was allowed to speak at Bryn Mawr, Smith, Wellesley, Mt. Holyoke, and Radcliffe. Despite Taylor’s invitation to Addams to speak on another topic, Milholland considered the president’s policy hypocritical, as Vassar women were given freedom and high aspirations in academia but in social reality told to remain in their place.

Since discussion of suffrage was forbidden on campus, toward the end of her junior year Milholland helped draw some 56 people out to the small cemetery adjacent to the college for a suffrage meeting. Meeting beneath the cemetery’s trees, forty undergraduates, ten alumnae, suffragist representatives from the area and from New York City and the meeting’s organizer, Harriet Stanton Blatch ’78, embodied the theme of their bright yellow banner reading “Come, Let Us Reason Together.” This meeting signaled the beginning of the Vassar Votes for Women Club, which continued to meet off-campus under Milholland’s leadership. In 1909, her senior year, Milholland’s tireless efforts persuaded President Taylor to allow a suffrage debate, with the understanding that no faculty were to speak. Unfortunately, the debate did not go as planned, and a number of professors voiced their support of women’s suffrage. Outraged, Taylor reaffirmed his previous policy on strict silence around suffrage. However, just before her graduation Milholland made a final pro-suffrage gesture. Abiding by the letter of Taylor’s mandate, Milholland staged a series of living tableaux in several student rooms in Main Building featuring fellow students, silently demonstrating through posters and the various settiings, as hoards of invited students filed slowly by, the sundry values of suffrage.

After her graduation in 1909, Milholland made her first appearance as a suffrage orator, stopping a New York campaign parade for President William Howard Taft when she began speaking through a megaphone from a window in a building the parade was passing. As she spoke hundreds of men broke ranks to see and hear her, thus beginning her reputation as one of the most powerful, persuasive, and beautiful orators in the suffrage movement. In the same year, Milholland applied to the law schools at Yale, Harvard, and Columbia only to be rejected on the basis of her sex. Eventually, she entered the New York University School of Law from which she received a law degree in 1912. While studying for her degree, she continued her suffrage work as well as other social activism, most notably participating in the shirtwaist and laundry worker strikes in New York City, for which she was arrested.

In 1913 the 27-year-old suffragist made her most memorable public appearance. Having helped organize a s massive suffrage parade in Washington D.C.—scheduled for the day before President Woodrow Wilson was inaugurated—Milholland cemented her charismatic identity as she led the parade, riding atop a large white horse through crowds of drunken men, wearing a crown and a long white cape.

Later that year Milholland met and married the Dutch coffee importer Eugen Jan Boissevain, proposing to him aboard a ship taking them to England, after a brief, intense courtship. The marriage of Boissevain and Milholland was by no means traditional according to her biographer, Linda Lumsden. Both were believers in free love, and they considered their relationship as a fusion between minds, souls, and bodies. Cut short by Milholland’s death, while the marriage lasted, Boissevain’s powerful but self-deprecating personality was always present to support and encourage his wife in her endeavors.

Milholland continued speaking on behalf of suffrage in both England and the United States, but in 1915 she diverted her efforts when she joined the Ford Peace Ship in an effort to stop World War I through neutral negotiation. She also served as a war correspondent until she was expelled from her position for her pacifist views. Returning to the United States in 1916 Milholland continued her work for suffrage, joining the National Women’s Party in support of a universal suffrage constitutional amendment and going on tour to the states to gain popular backing. Delivering an address on the tour in Los Angeles on October 19, 1916, Milholland suddenly collapsed. She was hospitalized and ten weeks later the 30-year-old activist died, her collapse and deterioration a result of pernicious anemia.

“Not to know what things in life require remedying is a crime… It leaves you at the mercy of events – it lets life manipulate you – instead of training you to manipulate life.”
Inez Milholland

After the suffragist’s death Mount Discovery, near the family’s estate in upstate New York, was renamed Mt. Inez in her memory, and the National Women’s Party held a memorial service for her on Christmas Day in the National Statuary Hall in the United States Capitol in Washington D.C.

Throughout her life Inez Milholland did more than speak and demonstrate for suffrage, her activism extended to trying to improve the lives of all disenfranchised Americans. After receiving her law degree she spoke fervently to various judges and public officials, advocating the reform of law enforcement and the court system in the hope of keeping young people out of the workhouses. She also spoke out on labor reform, pushing for better wages and hours for the girls who worked in New York City’s many department stores and for the city’s many women factory workers. Milholland also conducted a lifelong campaign against capital punishment. In her suffrage work, as well as her other advocacies, Inez Milholland engaged in a constant struggle with those in power to recognize the humanity of all classes and genders. She tried to make judges, lawyers, business owners, and elected officials see that the hearts and minds of those most marginalized by society were just as valid as were those of the powerful. Although at the time of her death Milholland never got to see the passing of the 19th amendment granting all Americans, regardless of sex, the right to vote, in her time, as she worked tirelessly for her cause, she never lost hope.

The Suffrage Movement at Vassar

“In Memory of Inez Milholland” Issued by the Inez Milholland Memorial Committee of the National Woman’s Party. Capitol Hill, Washington D.C. No. 1913.