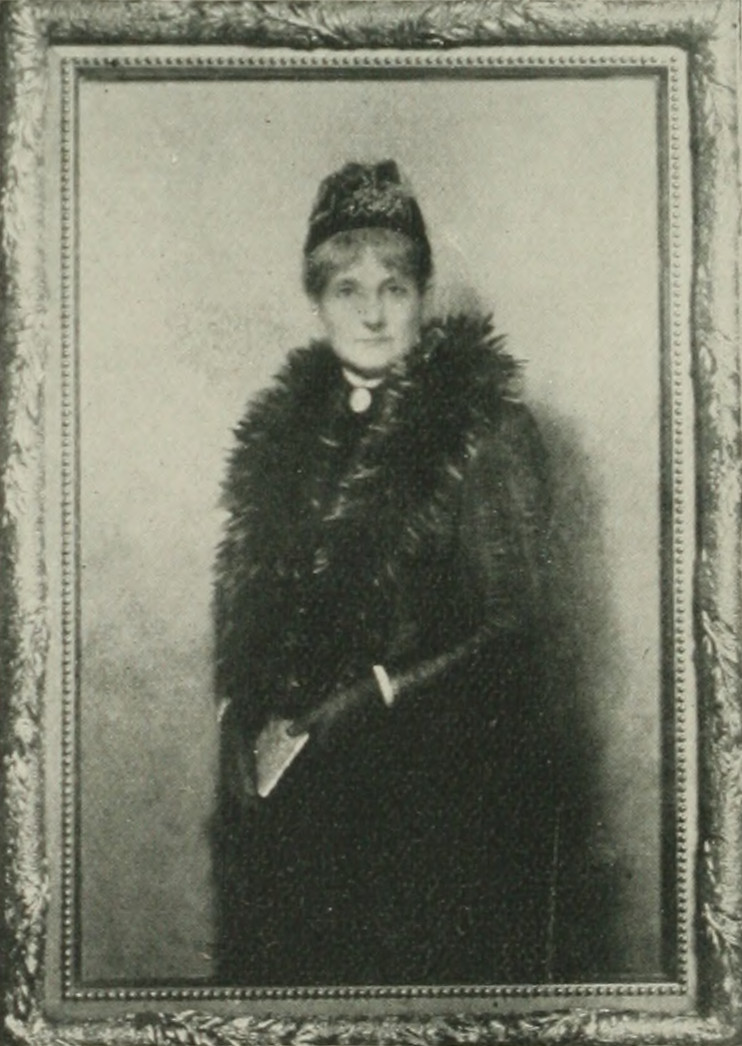 Elizabeth Williams Champney, a graduate of the Vassar class of 1869, gained fame for her “Three Vassar Girls” novels. Born in Springfield, Ohio in 1850 to abolitionist parents, Champney moved to Kansas before the start of the Civil War. A member of Vassar’s second graduating class, she began her literary career with a mock-biblical account of Matthew Vassar’s life entitled, The First Epistle on Matthew, which was deemed “shocking” and immediately banned from campus by the Lady Principal, Hannah Lyman. After graduation, Champney returned to Kansas, where she became engaged to a farmer. Her life soon took an unexpected turn, however, when she reunited with James Wells Champney (Champ), a Civil War veteran and well-known artist who had been “Lizzie’s” art instructor at the Young Ladies Seminary, an early “physical culture” school in Lexington, Massachusetts. The two married in 1873, and began an extensive tour of Europe, where their son, Edouard Frère Champney, was born in 1874. (1)

Returning to the United States in 1876, Champney published her first short stories in several popular magazines, including ‘’Harper’s.’’ Two years later, Champney finished the first of what would become a long series of “Three Vassar Girls” novels. Three Vassar Girls Abroad, illustrated throughout by Champ, recounts a lively tale of three Vassar students – Maud Van Vechten, the wealthy society girl; Barbara Atchison, the equally wealthy yet slightly eccentric West coaster; and Cecilia Boylston, the starving artist from Boston – on a leisurely romp across Europe. Over the next fourteen years, Champney produced ten more “Three Vassar Girls” volumes, situated everywhere from England to Switzerland to the Holy Land. Employing a “conversational” writing style, Champney managed both to entertain her young readers and to whet their intellectual appetites. In a typical “Three Vassar Girls” novel, the main characters tackle pertinent issues like bigotry and career development, while swooning over cute boys and attending garden parties.

Critics met Champney’s novels with differing opinions. While The New York Times hailed the series for “combin[ing] instruction and entertainment” through “exciting, melodramatic or history-making adventures”, and Harper’s listed the novels among the “Best Books for Girls”, The Nation dubbed Three Vassar Girls Abroad  “a diluted guide book, with a flimsy thread of rather silly personal narrative.” Likewise, in an 1882 Vassar Miscellany article, an anonymous reviewer lambasted Three Vassar Girls Abroad, calling the narrative “bald, disjointed, and inartistic” and lamenting, “It is not an enemy that reproached us, then we could have borne it!” Despite mixed reception among critics, the novels proved sprightly and fun, and Champney enjoyed considerable commercial success. She continued the series until 1892, at which point she had begun work on her acclaimed “Witch Winnie” series for children. During this period, Champney and her husband lived primarily in their Manhattan studio, where they partook freely of the city’s vibrant cultural scene, while collaborating extensively on Witch Winnie.

After her husband suffered a fatal fall down an elevator shaft in 1903, however, Champney focused on her “Romance” series for adult readers, which she continued until her death in 1921. By that time, she had written over one hundred books and articles. An imaginative and celebrated writer, Elizabeth Champney championed the benefits of higher education, and paved the way for the Vassar student abroad.

“I think you are the luckiest girl in the world, Maud,” exclaimed Barbara Atchison; “here am I, with a lot of money, and nowhere to go. Father is stationed in the Black Hills this summer, and he doesn’t want me out there. He writes, ‘You have seen enough of Western society for the present. You are too old to be kept in the background as a child, and too young to do the honors of my house. If you mother had lived, home would have the best place for you; as it is, I wish you to profit by the civilizing influences of the East. You write enthusiastically of your New York friend; visit with her, this summer, and I will pay all expenses.’ There it is and my New York friend is going to Europe.”

“Elegant! But would your sister take charge of such a harum-scarum thing as I am, a western officer’s daughter, who has been brought up on the Plains and in forts? And is there time to write to Papa?”

“Yes, yes of course she would; and there’s plenty of time. And, oh, Saint, won’t you come too?”

“I intended to go to Munich and continue my music, after we graduate,” she replied, “and I would enjoy this summer trip immensely, but I am afraid I can’t afford it.”

“Now, Saint, just look here!” exclaimed Barbara. “If we go without you, there will be three of us, a dreadfully odd number. We will have to pay just as much for carriages and rooms as if there were four; and I will have a room alone, which I detest. If you go, it will cheapen everything, and I insist on paying just what I would have to if you were in the party. That will bring down your expenses somewhat. Then you are the only one of us that can speak French creditably. We need you, my dear, as interpreter. And what an improving influence you will have over me! When Papa hears that I am going abroad with a clergyman’s daughter from Boston, he will believe that the civilizing influences have begun in good earnest.”

“It would be delightful,” mused St. Cecilia. “I wonder whether I would have to buy a very expensive outfit in the way of clothes.”

“I shall get everything over there,” replied Maud. “Sister Lily manages to go abroad at least every three years, so as to do all our shopping in Paris. Dresses are a bother while one is traveling, and you have a first-rate tourist’s wardrobe; that Boston waterproof of yours will have occasion to flap its wings and crow over all our finery.”

The girls laughed at this allusion to Saint’s waterproof, for it was a very characteristic bit of costume. Barbara declared that it completed the medievalism of her name, giving her the appearance of a nun, or a saint, in flowing gown of sackcloth.