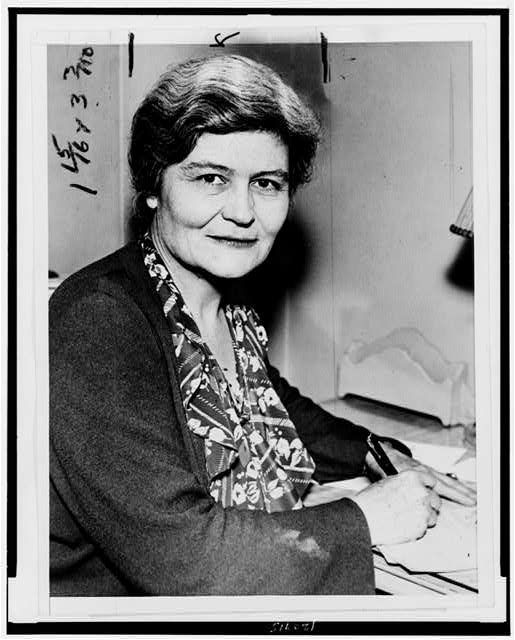 A tireless activist for rights of workers and children, Josephine Roche dedicated her life to proving that better living conditions were good business and that there were practical, effective ways to help people.

The only child of John J. Roche and Ella Aspinwall Roche, Josephine Roche was born on December 2, 1886 in Neligh, Nebraska. She graduated from a private girls school in Nebraska whose certificate Vassar acknowledged, and she entered Vassar in September 1904. Plunging into Vassar life, Roche debated with Qui Vive, visited slum settlements in Poughkeepsie, joined the basketball and track clubs and was a double major in Economics and Classics. Abigail Leach (Greek) and Herbert Mills (Economics) were among her teachers, and her yearbook quotation sums up her time at Vassar: she was “cheerful and happy in the prospect of having almost more to do that day than she could possibly accomplish.”

Despite a conservative, violently anti-union father, she embraced the liberal social and economic thought of the day – learning at Vassar about the benefits of trade unionism, minimum working and living standards and active involvement in the political process. Following commencement, Roche moved to New York City and entered Columbia University to pursue a Masters in Social Work (received in 1910). Between 1910-12, Roche investigated the conditions of working children and immigrants for the Russell Sage Foundation and Columbia and directed evening classes at the pioneering social service agency, Greenwich House.

Roche’s family moved to Denver in 1908, and in October 1912 Roche left New York to become Denver’s first policewoman. As Inspector of Amusements, she supervised public dance halls and cafes and cleaned up the Red Light district – taking girls home to their families. In a battle with entrenched business interests, Roche and her boss, Commissioner Creel, were fired in early 1913. Community pressure obtained her reinstatement but official non-cooperation led to her resignation in August 1913.

In 1915, President Hoover appointed Roche Special Agent of England and the United States for the Commission for Relief in Belgium. It was the first of many governmental appointments. From 1916–1918, she worked as Director of the Girls Dept. in Denver’s Juvenile Court. From 1918–1923, she directed the Foreign Language Information Service (FLIS) – a service providing legal assistance, news and information in many native languages and lobbying on immigrant issues. In 1920, Roche married Edward Hale Bierstadt, an author and drama critic who worked for her at FLIS. They were divorced in 1922, and in 1923 Roche moved to Washington as Director of the Editorial and Special Studies department of the Children’s Bureau. In 1925, upon the illness of her father, she returned to Denver as referee of Denver’s Juvenile Court.

On the death of her father, in January 1927, Roche inherited his 40% interest in the Rocky Mountain Fuel Company. At the time, the company and the United Mine Workers were engaged in a bitter strike over higher pay and better working conditions. By November, 90% of the mines in Colorado were on strike and 6 miners had died in the Columbine Massacre at a Rocky Mountain Fuel Company mine.

In March 1928, borrowing $35,000 from friends, Josephine Roche bought controlling interest in the fuel company, and over the next 6 months, she radically changed it. Issuing the revolutionary statement that “the men employed in the mines are as much an essential factor in the industry as the capital invested and have the right to act upon equal terms with the investor to determine working and living conditions,” Roche recognized the United Mine Workers union at the RMFC, rehired strikers, raised pay, eliminated company scrip, instituted workmen’s compensation insurance and recruited workers to help sell union coal.

In 1934 Roche ran for governor of Colorado on the motto: “Roosevelt + Roche = Recovery.” She lost the Democratic primary to the incumbent governor by 10,000 votes. In Nov. 1934, she joined FDR in Washington as Assistant Secretary of the Treasury. “The baby member of the Brain Trust,” Roche was in charge of the Public Health Service, Chair of the advisory board of the National Youth Administration and a participant in the committees formulating Social Security.

In 1937, Roche returned to the Rocky Mountain Fuel Company, commuting regularly, however, to Washington to chair the National Health Conference and the Interdepartmental Committee to Coordinate Health and Welfare Activities, groups that worked tirelessly for federal health subsidies and a broad government health plan for all US citizens.

The RMFC closed in 1944 and Roche, who had become President of the National Consumers League in 1940, joined John L. Lewis and the United Mine Workers in 1948 as Executive Director and neutral trustee of the United Mine Workers’ Welfare and Retirement Fund. Funded by the mining companies, the fund provided health care, disability pensions and pensions to miners’ widows. During the 24 years of her administration, the Fund collected $2.5 billion and paid out $1.2 billion in pensions and $900 million in medical care for miners and their families, via an extensive network of hospitals and clinics.

After Lewis’s death, in 1968, the union, now under the contested leadership of Tony Boyle, was sued for mismanagement of the Fund. In the filing, both Boyle and Roche were sued personally. A key charge was that the Fund had kept up to $75 million at a time in a non-interest bearing checking account at the union-owned National Bank of Washington. Roche said the money was kept there as ready cash—an ultimately unnecessary precaution. All were convicted in 1971. At age 85 she was forced to resign from the Fund. She died five years later in July 1976.

Josephine Roche, tireless activist for the rights of workers and children, was honored throughout her career, receiving honorary degrees from Smith (’32), Oglethorpe, Mt. Holyoke (’35), and the University of Colorado (’65). Cited by American Women as one of the 10 outstanding Women in the US in 1936 and by the General Federation of Women’s Clubs in 1941, she received the US Steel National Achievement gold medal in 1935 and was called the nation’s most prominent and efficient business woman of 1935 by the 500 members of the Chamber of Commerce. She received the Albert Lasker Award from the American Public Health Assn in 1956 for her work with the UMW Health and Retirement Fund.